AWS, Microsoft and Google continue to attract over half of worldwide cloud spending. 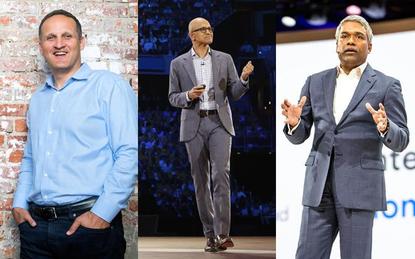 Amazon Web Services (AWS), Microsoft and Google are still sitting head and shoulders above their cloud infrastructure competitors as the global market booms to US$45 billion as of Q3.

According to analyst firm Synergy Research Group, enterprise spending on cloud infrastructure services rose 37 per cent from the third quarter of 2020.

As of now, AWS, Microsoft and Google continue to attract over half of worldwide cloud spending, with market shares of 33 per cent, 20 per cent and 10 per cent respectively.

However, the global uplift has also trickled down to the rest of the world's cloud players, with the next 10 largest providers achieving 28 per cent year-on-year revenue growth, while medium-to-small cloud providers grew by a quarter.

Public IaaS and PaaS services account for the bulk of the global cloud market, growing by 39 per cent in Q3. The dominance of the major cloud providers is even more pronounced in public cloud, where the top three control 70 per cent of the market.

"Given their scale, ever-expanding worldwide presence and impressive revenue growth rates, it is understandable that Amazon, Microsoft and Google grab the most attention for their cloud activities. However, that makes it easy to overlook the fact that other cloud providers generated US$17 billion in the quarter, a figure which grew by 27 per cent from last year,” said John Dinsdale, a chief analyst at Synergy Research Group.

“By any standards a US$17 billion market growing at such a rate is an attractive proposition for many service providers and their suppliers," he continued. "Clearly there are challenges with the big three companies lurking in the background, so the name of the game is not competing with them head on. Providing companies are smart about targeting the right applications and customer groups, cloud can provide a broad and exciting range of growth opportunities for them.

According to Synergy's Q2 report, the big three claimed 63 per cent of global cloud infrastructure services spend during the three months ending June, with total spend topping US$42 billion.

Meanwhile, in June, Synergy claimed that hyperscale cloud operator CAPEX in the first quarter of 2021 was up by 31 per cent from the prior year, reaching US$38 billion.

That quarter brought the total CAPEX expenditure over the previous four quarters to over US$149 billion, compared to US$121 billion in the four quarters prior.