Microsoft's Rachel Bondi is making strides to right an imbalance she sees in the A/NZ market and get more women playing on an even footing with men in the local tech industry. 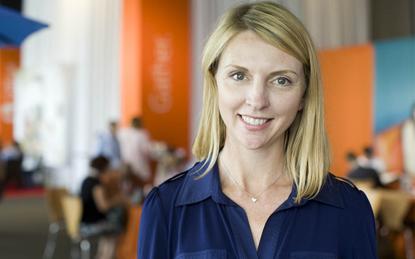 When Microsoft Australia and New Zealand chief partner officer Rachel Bondi returned to Australia from the United States, where she worked at the vendor’s HQ in Washington, she immediately noticed a cultural contrast between the two branches of the business.

“I returned to Australia back in 2016 and I was excited to be coming back after nearly two decades in the US, but my first observation coming back was that it definitely felt different to being in the US compared to here,” Bondi told ARN.

“I did feel like I was the only female in the meeting. And the experience of the meeting was different. I was questioning what I had walked back into."

“I started looking for other women who I thought were achieving great things. The more I was having the conversation the more I made other men and women think about the problem more,” she added.

Bondi held the role of Skype and Microsoft 365 consumer innovation integrated market general manager for her final one-and-a-half years in Redmond, at Microsoft’s global headquarters. While there, Bondi came to accept a certain percentage of women in various functional areas within the company, particularly in marketing and product.

Back in the local market, Bondi recognised that the community of women in such roles simply wasn’t as large as in the US.

“Some of the functional areas here weren't as well represented here as there,” Bondi said. “It felt a bit blokey.”

Bondi’s comments don’t seem to be a condemnation of men in the local IT industry across Australia and New Zealand, but rather a call to arms for the industry to shake up a cultural status quo that appears to have become an anachronism on the world stage.

To this end, Bondi is making strides to right an imbalance she sees in the A/NZ market and get more women playing on an even footing with men in the local tech industry. In these pursuits, Bondi has been backed by her employer.

A first step is getting people talking about gender equality, especially men.

With this goal in mind, Microsoft held a so-called ‘Stand Up’ event on 27 October, designed to bring the issue of gender inequality to the fore and review progress made by the Microsoft Partner Male Champions of Change Group.

The members represent some of the largest organisations in Microsoft’s partner ecosystem and, combined, they employ well over 10,000 people.

It is claimed that, over the past 18 months, 90 per cent of group members have developed specific gender equality strategies and action plans and 75 per cent of them have reviewed their sexual harassment policies, education and reporting strengthening the internal support for employees.

Bondi is co-convenor of the group, along with Elizabeth Broderick, former Australian sex discrimination commissioner – among a litany of other positions of note, many of which have been aimed at addressing human rights and gender equality.

Broderick spoke at the half-day Stand Up event, as did former Australian politician Kate Ellis, with all Microsoft staff in Australia and New Zealand, as well as 5,000 people from the partner community, invited to tune in and participate.

“Stand Up was designed to explore the lived experience of people who identify as women in the workplace and consider the steps we can all take to advance equity and create more inclusive workplace cultures,” Bondi said in a blog post discussing the event.

“It was about allyship and the idea of how we can all play a role as an 'upstander,' rather than a bystander. All of us have something in common, the desire to have cultures and workplaces that are healthy, respectful, safe and inclusive."

“Following the event, our company went into team breakout groups for a more intimate conversation and to create a safe space for sharing. I joined a group, and I wanted to share just how personally struck I was especially hearing the stories of women being oppressed, exhausted and broken,” Bondi added.

From a personal perspective, Bondi – who was a finalist in this year's ARN Women in ICT Awards (WIICTA) – noted that it was becoming increasingly clear to her, as a senior leader, that her own years of experience had created a position of power that protected her from everyday sexism.

“In my team call, I was astounded to hear those early in their career had to experience casual banter and comments about their appearance,” Bondi said. “This ‘blokey’ behaviour is something I apologise for, and we need to continue to press on our code of conduct in our teams, with our partners and with customers where we do business.

“The idea that we desensitise or depersonalise these experiences for any woman as the norm is not okay. I could feel the familiar and deep level of armour start to form over in the moments the stories were told. I now need to process that chaos with some calmness and will be checking in with those I care about.

“This week, I was personally questioned whether Microsoft should play a role in having this conversation for the tech industry. Well, if not us, then who? We must change this. It’s particularly important for the tech sector because we are literally building the future,” she said.

On this front, Microsoft and Bondi are taking some practical steps to get more women into the IT industry.

In addition to encouraging leaders from within Microsoft’s own ranks to get out and volunteer at educational institutions to make tech more accessible and support teachers in drumming up interest in technology, the company is undertaking something called the Microsoft ‘Returnship’ program.

The program, which is still in its early stages, is designed to get women returning to the workforce, specifically people who have had a professional career but have taken time out. In practice, the program aims to bring them back into the professional fold by taking a career path approach with them, for example focusing on cyber security or data analytics.

The program, which is expected to kick off next year, would give participants employment from day one, in partnership with tertiary education institutions, to get 100 per cent of the returning women into technology work.

From Bondi’s perspective, the simple (or not so simple) task of getting more women into tech is a top contender as a way for both Australia and New Zealand to address their respective tech skills shortages, which have been particularly severe since the pandemic saw borders close to the usual flow of international talent entering the countries.

“We know partners, and a lot of employers in this sector are aware the traditional [career] path is changing, and partners want a more comprehensive way of looking for staffing,” Bondi said, noting that Microsoft was looking at an initial intake of 200 individuals for the Returnship program next year.

At the same time, the number of people signing up for another ongoing initiative, the ‘Women Rising supported by Microsoft’ program, is falling dramatically short of where it needs it to be, according to Bondi.

The six-month program is fully virtual, allowing women to attend from any location and integrate their development into their schedule. It is focused on retaining, developing and advancing the women in the Australian technology sector.

But things are looking up. This year, according to Bondi, there have been nearly 1,000 women and managers join the program, and for the March cohort, Microsoft is prepared and ready to double that number.

“We have a lot of women leave the industry to raise children and if we can get those women, mums and grandmothers, to come back into technology, we can make a change,” Bondi said.

“We suspect over the past two years tens of thousands of women have been displaced, or perhaps left work during the pandemic because their home life demanded it.

“These women are the primary caregivers for families and have been forced to step down from work completely when schools and other support systems closed."

“We have to create longer term change. We have to attract women of all ages into the industry,” she added.