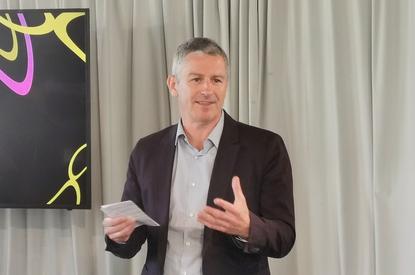 Walton said Vodafone was using the Amazon Connect cloud customer contact system to transform its customer experience in a really fundamental way as part of how the telco sees its post-COVID future.

Weta Digital, meanwhile, chose AWS to take the IP and rendering and production technology it developed over the last 20 to 30 years to put it in the hands effects people around the world.

He described this as an "incredibly exciting project and a project with huge ambition".

Walton also talked about AWS' partnership with power company Vector to jointly developing technology that could be applied to "pretty fundamentally" improve the way energy systems run more efficiently around the world.

It was a great example of innovating from NZ and had helped create 30 high skill jobs.

Walton said resilience, security and privacy continued to be critical aspects of the AWS platform. With new privacy laws now in place, the company had created a white paper to help customers understand how AWS could be used to meet or exceed those privacy requirements.

Walton said AWS was proud of the continued pace of innovation the cloud giant was able to demonstrate and how this was a key differentiator.

One of the key outcomes of the pandemic was that companies were realising digiital technologies were becoming increasingly important in allowing them to respond to fast-changing environments.

"There's a huge level of change where business models are being turned upside-down," he said.

The press event then moved on to virtual and hybrid roundtables across A/NZ.

A co-founder of the successful Sharesies stock trading app, Brooke Roberts, and Xero CTO Mark Rees were the local contribution to a start-up panel on the tech behind the founders.

Next up, Bridgette Dalzell, general manager of customer connection hubs at Bank of New Zealand, joined a panel on next generation technologies disrupting financial services.

Āwhina is natively embedded within Amazon Connect and is designed to help customers that call BNZ with banking inquiries using both English, elements of Te Reo and Kiwi slang.

Rees talked about how Xero had an inside view on the impact of COVID-19 on small businesses and how the company began delivering and connecting users to government relief schemes around the world.

"The governments moved really quickly to provide these new capabilities so we had to pivot our product teams to build software that allowed small business customers to connect to those schemes so they could receive the funding," he said.

Along with the voices of other founders and a positive outlook from venture capital firm Blackbird Ventures, Sharesies' Roberts said the strength of the startup community in A/NZ was the ecosystem that had been created between the likes of Sharesies, Atlassian and Xero.

"They've been there done that and you can start leveraging their experience to build your companies," she said.

"You see that in terms of investment. There is starting to be a lot more opportunity from a capital perspective along with sharing knowledge early on."

Roberts said there was no formula for success. With six founders, Sharesies is atypical, she said.

"We are set up differently. We have three chief executives rather than one too. I think it's really great to start with a blank piece of paper and think about the kind o company you want to create."

It was also important to have a strong purpose, a "north star", she said.

Sharesies' was "to create the most financially empowered generation" so that people with $5 to invest had the same opportunities as someone with $5 million.

The panels and other local and trans-Tasman content were followed by a live stream of AWS CEO Andy Jassy's keynote.