Be advised, though, that installing the patch is a one-way street. 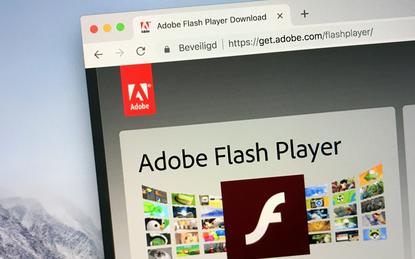 On December 31, Adobe Flash Player will go out of support. A new Windows patch, however, will allow you to get a jump on things.

Microsoft detailed the process to remove support for Adobe Flash Player as part of a new support document, which links to the patch itself for various Windows platforms. As Microsoft warns, however, the process is a one-way street: Once installed, the patch cannot be uninstalled—though you could reinstall Windows if you were desperate.

Adobe, in conjunction with browser makers Microsoft and Google, announced three years ago that Adobe Flash Player would be shelved by the end of 2020. Adobe said at the time that enough progress had been made within open web standards like HTML5 that it was time to phase out Flash.

With that date almost upon us, Microsoft is readying Edge (both the new and legacy versions) as well as Internet Explorer to ditch Flash once and for all. On December 31, Microsoft will begin applying this patch (or something like it) whether you’re ready or not. There’s one exception: Enterprises that depend on Adobe Flash for some legacy application will be allowed to run it via the Internet Explorer mode feature within Edge, but without Microsoft support.

Microsoft does allow a little leeway in case you install the Flash-killing patch, then later change your mind. One solution involves creating a Windows restore point, then restoring your PC to a point before the patch was installed. Alternatively, users could reinstall the Windows operating system entirely, and choose not to install the update after doing so.

Holding onto legacy Flash code so that you can access Flash archives of art and games like Newgrounds.com has become less important as time goes on, and as emulators have been developed. In 2019, for example, Newgrounds said that it is helping design a browser extension to play Flash in the browser via emulation, through a technology developed by Ruffle.rs. The site said then that it is first working to cover animated content, then games.