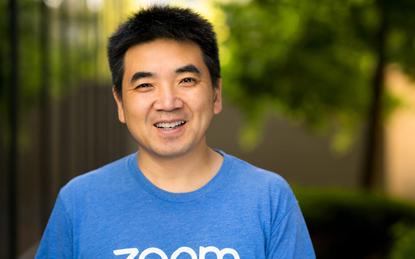 Zoom raised its annual revenue forecast by more than 30 per cent after comfortably beating quarterly estimates as it converts more of its huge free user base to paid subscriptions.

Shares of Zoom, which have surged almost four-fold this year, rose 9.3 per cent to US$355.30 after the bell. Earlier in the day they hit a record closing high of $325.10 in regular trading.

Video conferencing platforms, once used mostly as a technological substitute for in-person meetings, became a vital part of day-to-day life this year for people stuck at home under coronavirus restrictions, be it for work, school or socialising. Zoom rivals such as Microsoft Teams and Cisco's Webex have also seen soaring usage.

When the pandemic hit in early 2020, Zoom was a relative upstart founded by a former Cisco executive that had gone public on a promise to make video conferencing software easier to use.

But the ease of use came with privacy and security concerns that drove some customers to competitors earlier this year and prompted Zoom to embark on a 90-day plan to address the issues. Zoom began testing end-to-end encryption of its service in July but has not yet implemented the feature for most users.

The surge in usage also strained Zoom's infrastructure, with some outages last week as schools in many parts of the United States resumed classes virtually.

Since the start of the pandemic, Zoom has worked to convert the mass of free users into paying customers, which is important because the company relies on both its own data centres and cloud providers such as Amazon.com and Oracle Corp to provide its serving, meaning it must bear costs for free users.

The company said revenue rose 355 per cent to $663.5 million, topping analysts' average estimate of $500.5 million. The company's gross profit rose to 71 per cent from 68 per cent, but remains far below the 80 per cent Zoom operated at before free users flocked to the service.

Zoom said it now has 370,200 institutional customers with more than 10 employees, up about 458 per from the same quarter last year. The number of large customers - those generating more than $100,000 in revenue in the past year - more than doubled to 988 in the fiscal second quarter.

Zoom is working to expand its service in India, where it opened a technology centre in Bengaluru last month, and plans to launch a large teleconferencing screen to work with its service, a challenge to companies like Cisco that sell both software and hardware for video calls.

The company, founded and headed by former Cisco manager Eric Yuan, raised its annual revenue target for fiscal year 2021 to a range of $2.37 billion to $2.39 billion, from $1.78 billion to $1.80 billion previously.

(Reporting by Neha Malara in Bengaluru and Stephen Nellis in San Francisco; Editing by Sriraj Kalluvila and Leslie Adler)