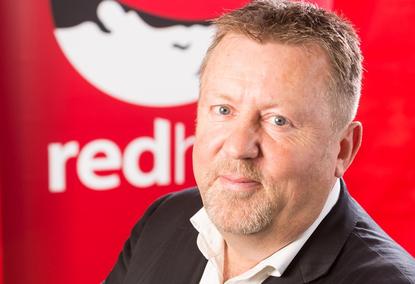 Once an enterprise Linux specialist, Red Hat is now providing answers to some of the biggest questions being asked of corporate and government IT.

The company's OpenShift container platform, for instance, was key to the modernisation of New Zealand Customs' legacy CusMod applications, taking them from a dependence on proprietary hardware into hybrid cloud.

The fact that Datacom engineered that shift along with Section6 providing modernisation services points to another aspect of the vendor's strategy -- apart from having what country manager Derek Wilson says are a couple of direct customers, Red Hat remains a channel-based business.

Key local partners include Spark, OSS, Enterprise IT, Section 6, Solnet as well as Datacom and a few others.

Global partners include, of course, parent company IBM as well as HP, DXC, Tech Mahindra and some of the big global systems integrators.

"If we look at where partners make money, which I guess is the important thing, firstly we sell a subscription, for instance, initially to Red Hat Enterprise Linux, which covers support, documentation, training IP, patches and downloads and so on," Wilson told Reseller News.

"Our partners can make money from selling subscriptions and they can make some margins on that but where they really differentiate themselves is on services wrapped around our products."

That was certainly part of the mix for Customs, with CusMod now served from Datacom's Govt.Container platform-as-a-service (PaaS) service.

"It was the first implementation in the region, I think, certainly locally, of a local provider doing OpenShift as a service," Wilson said.

IBM is a shareholder but also a partner.

"Red Hat also partner with a lot of IBM competitors, DXC for example," Wilson said. "We have been very clear about keeping our independence and neutrality and working with all the other partners."

"What we've been doing over the years is growing the portfolio and growing the amount of customers that use that portfolio," Wilson said.

While still an open source company, Red Hat is no longer just "the Linux company".

Customers are embracing the power of OpenShift to break down monolithic legacy applications into microservices.

They are also using Ansible for automation and cost savings as they shift to hybrid cloud models.

"We are seeing a big push on the OpenShift products and the Ansible products," Wilson said.

"We are an open source company so innovation is key to us. We are constantly releasing new versions of software."

Last year, for instance, Red Hat announced it was including its Insights for Linux proactive monitoring platform in its enterprise Linux subscriptions to help improve customers operating environments. New tools have also been added to OpenShift to speed the development of customer environments.

It has been said that while IBM has bought Red Hat, it was actually Red Hat that had taken over IBM, but Wilson doesn't go that far.

"We're not taking over IBM, but they are learning about our culture," he said. "They were making cultural changes already but we feel they are embracing our culture which is a good thing."

So, being an enabler of hybrid cloud, what is Red Hat's take on the much anticipated arrival of Microsoft's local cloud region in New Zealand?

"We actually exist in multiple clouds, Revera/CCL, AWS, Google, Microsoft, Alibaba -- all have our product in them from buying Red Hat Enterprise Linux to managed OpenShift," Wilson said.

"We are really excited by it. We think it is a significant advantage. We’ve seen our footprint in Azure grow quite significantly over the last couple of years and with government and private clients it is going to be quite significant.

"From a cloud provider perspective, IBM has its own cloud, but we don’t just work with IBM cloud."

Red Hat has been equally careful to keep its partner programmes separate from IBM's, as well as its premises and facilities.

ANZ New Zealand was one that used the capability, to transition from routine, repeatable network operations tasks to an approach focused on automation.

There is a cultural aspect to the lab as well, Wilson explained.

"We bring disparate teams together who haven’t worked together before. We try and change the culture for collaboration, short sprints and much more openness."

ANZ Bank, for instance, sought to support its commitment to talent acquisition and retention. To support these, the bank’s teams needed guidance on adopting agile development approaches and Ansible community-developed automation technology.

It was a similar story at Queensland's Heritage Bank, where the goal was speeded development cycles. The teams there brought in a new payments system 10 months early.

"It was about bringing groups of people together, in their case including the CEO as well."