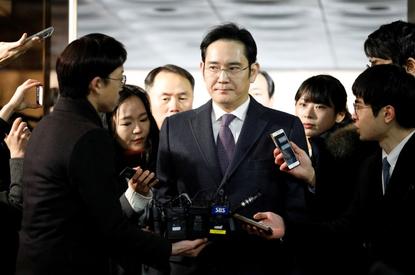 Samsung Group heir Jay Y. Lee has been by prosecutors about a controversial 2015 merger and alleged accounting fraud that they said may have helped him advance his succession-planning agenda at the country's top conglomerate.

Prosecutors have been investigating suspected accounting fraud at drug company Samsung Biologics after the Korean financial watchdog complained the firm’s value had been inflated by 4.5 trillion won (US$3.64 billion) in 2015.

They have alleged that Biologics had violated accounting rules to help improve the value of its major owner Cheil Industries, which counted Lee as its top shareholder, Yonhap News Agency, which first reported Lee's questioning, said.

The deal was criticised by US hedge fund Elliott Management and other investors for favouring family members at the expense of minority shareholders.

The prosecutors' office confirmed Lee was summoned for questioning.

"We today summoned a relevant person with regard to Samsung Group's illegal merger and accounting fraud case," an official at the Seoul Central District Prosecutors' office told Reuters.

A spokesman at Samsung Electronics, the conglomerate's biggest company where Lee is vice chairman, declined to comment.

Lee, 51, served a one-year detention over the bribery case until it was suspended in 2018, but the possibility of a tougher sentence has emerged after the Supreme Court overturned a lower court ruling on the case last year.

Earlier this month Lee apologised for the bribery scandal and pledged that he would not pass on the company founded by his grandfather to his children. But it has been criticised by governance experts for lacking details.

"There are still a lot of controversies related to his management succession. He will not be able to avoid public criticism," said Park Ju-gun, head of research firm CEO Score.