​Equinox IT shifts to co-CEO model for real-time agility

Wellington and Auckland based CEOs aim to decentralise decision-making 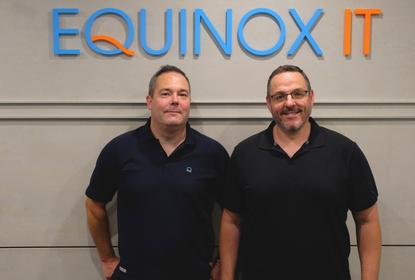 Celebrating its 25th year in business, Equinox IT is adopting a new leadership approach with the appointment of new co-chief executive officers.

In a planned succession, David Reiss and Deane Sloan, both still principal consultants in the Wellington and Auckland markets, have taken charge of the company under the mantra "two CEOs, one mission".

They were formally appointed on 1 February after acting in the roles since October.

"David and I together bring two sets of eyes and two perspectives to respond and adapt to make a difference to our people, our clients and our communities," Sloan said.

Being both co-CEOs and principal consultants meant the pair can bring clients’ needs into the way they run the business in real-time, Reiss added.

Equinox IT chose to hire from within and appoint two existing leaders on merit to continue to grow the company's DevOps, Agile, cloud and business transformation services.

Sloan had contributed to Equinox IT for the last 20 years in roles including principal consultant, chief technology officer, software development director and general manager, Wellington.

Reiss has been with the company since 2016, holding the roles of principal consultant and general manager, Auckland. Before that he spent 14 years at Spark Digital, where he held roles in consulting, sales and marketing.

The co-CEOs have also established a "working charter", agreeing how they will work together to avoid potential issues of shared responsibility and accountability.

"We're both naturally taking the lead in our areas of strength, experience and expertise," Reiss said.

"For example, I am naturally leading client activities in Auckland and engagements relating to cloud services and I take a keen interest in sales and marketing activities.

"Deane is naturally leading client activities in Wellington and engagements relating to Agile and DevOps and he takes a keen interest in client and service delivery activity."

Based in Wellington, Sloan has both commercial and government client experience and is able to make rapid decisions relevant to the Wellington market.

A key intent was that the co-CEO model helped decentralise decision-making.

The co-CEOs saw this as a way to enable further new ways of working, allowing already autonomous employees to make certain decisions within the context of their work.

Former managing director Roger Dalgleish, who has led the company since it was founded in 1995, is now based in Southland, and will become chief operating officer.

Dalgleish said it was the right time for new leadership.

"David and Deane have demonstrated excellence in the way they have led core parts of our business," he said. "It's natural for them to now pick up the leadership of the company as we look to grow the business for the future."