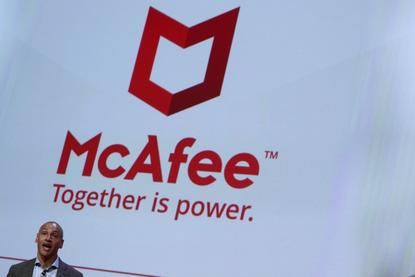 McAfee has hired Peter Leav, the former CEO of BMC Software, as its new CEO, replacing Chris Young, who created the cyber security company in its current form by carving it out of Intel four years ago.

The move gives McAfee the option of pursuing an initial public offering with a new leader. It has also considered deals in the sector, including potentially merging with NortonLifeLock Inc.

Young will become a senior advisor at buyout firm TPG, which acquired a majority stake in McAfee from Intel in 2016 in a deal which valued the company at US$4.2 billion, including debt. Young will work with TPG on new technology investments.

During Young's tenure, the company saw mid-single digit revenue growth, according to a person familiar with the matter.

Leav previously served as president and CEO of BMC, a business software firm, for three years. He left in 2019, a few months after the completion of private equity firm KKR & Co's US$8.5-billion buyout of the company. He will start as McAfee CEO on Feb. 3.

"Peter has exactly the right mix of experience and expertise to lead McAfee in its next phase of growth," said TPG co-CEO and McAfee Chairman Jon Winkelried.

The global cyber security industry was valued at US$116.5 billion in 2018, and is forecast to grow around 11 per cent per year through to 2025, as the number of cyber security threats continues to rise, according to research firm Grand View Research.

TPG has yet to make a decision on the timing or manner of its exit from McAfee, according to a person familiar with the matter.

In the last few years, McAfee has managed to grow its main cyber security software business, which focuses on consumers, through price increases, new partner programs and good retention rates, according credit ratings agency Moody's Investors Service Inc. This growth has been partially offset, however, by weakness in its business of serving other companies, which remains competitive, according to Moody's.