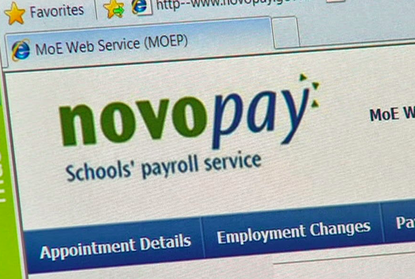 Novopay is steadily heading towards replacement.

The technical ghosts of the failed Novopay schools payroll project are gradually being put to rest, with a new online portal now rolled out to schools nationwide.

The portal, called EdPay, is now available to all schools after trials starting in March and progressive roll-outs which saw the final 1650 schools given access on October 24.

"The rollouts have gone smoothly, and schools are telling us they like EdPay," said Arlene White, chief executive of government-owned company Education Payroll (EPL).

"They’ve been sending us ideas for improvements, many  of which we’ve been adding in on a fortnightly release pattern."

Schools still have access to Novopay online, and will keep that until all of its features are available in EdPay and schools are comfortable using it.

"Once EdPay has replaced all Novopay features, we’ll be able to switch Novopay online off," White told Reseller News.

Every school also has a dedicated EPL payroll adviser who helps out with any payroll concerns and collects feedback.

EdPay is intuitive to use, White said, and has inline help and training as well as tool tips.

At a cost of $182 million, the Novopay project was one of the biggest project failures in government IT. Far from being easy to use and automated, it required a large amount of manual processing and was not designed to handle the complexity of the schools payroll environment.

Significant core elements of Novopay remain, including the heavily-customised Alesco/Novopay pay engine and Oracle database. The Novopay portal will also remain live until EdPay fully delivers all of its features.

So far schools can use EdPay for adding new hires, terminating jobs/contracts and updating employees' personal and financial information, including Kiwisaver.

They can also see the status of all employees on one page, which couldn't be done in the Novopay Online portal.

New features coming soon include an entitlement engine that will allow schools to easily select and add allowances for employees.

"We’ve also just finished touring schools around the country to find out what they’d like to see in the leave feature," White said.

"This is the busiest time of the year for schools, as they have a lot of extra administrative payroll tasks to complete before Christmas and in readiness for the New Year, so we probably won’t be asking them to test any new features until early 2020."

EdPay is being built by EPL using Agile methodology, augmented by partners and suppliers including Deloitte, Fronde, Assurity, and independent contractors. EPL also hosts EdPay’s infrastructure which connects to the Ascender/Oracle platform.

A multi-cloud approach leverages other components in Azure and Google.

The Oracle database is under extended support until December 2020.

Detailed work is now on the horizon to analyse the upgrade combinations that’ll get optimum longevity out of the software investment.

Novopay Online will likely need to be retired before those upgrades can go ahead.

White said the rest of the work packages that were mentioned in the business case were progressing well, and EPL even won the Institute of Internal Auditors New Zealand award this year for team excellence in internal auditing.