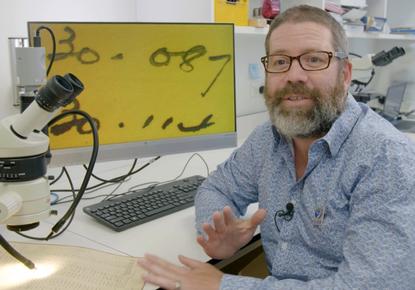 The National Institute of Water and Atmospheric Research and Microsoft have teamed up to use artificial intelligence to make handwriting recognition more accurate and to understand "the week it snowed everywhere".

Microsoft awarded NIWA one of its AI for Earth grants to help the project, which will support advances in automating handwriting recognition.

Computers have not yet caught up with humans when it comes to deciphering handwriting, so more than a million photographed weather observations from old logbooks are currently being painstakingly entered by an army of volunteer “citizen scientists” and loaded by hand into the Southern Weather Discovery website.

The effort is part of the global Atmospheric Circulation Reconstructions over the Earth (ACRE) initiative, which aims to produce better daily global weather animations and place historic weather events into a longer-term context.

NIWA climate scientist Dr Andrew Lorrey said the AI project has the potential to revolutionise how historic data can be used.

The first step is to use weather information recorded during a week in July 1939 when it snowed all over New Zealand,all the way to Cape Reinga.

Lorrey has been studying the weather in the last week of July 1939 when snow lay five centimetres deep on top of Auckland’s Mt Eden, the hills of Northland turned white and snow flurries were seen at Cape Reinga.

“Was 1939 the last gasp of conditions that were more common during the Little Ice Age, which ended in the 1800s?" he asked. "Or the first glimpse of the extremes of climate change thanks to the industrial revolution?”

Weather records at that time were handwritten and kept in logbooks with entries made several times a day, recording information such as temperature, barometric pressure and wind direction.

“These logs are like time machines, and we’re now using their legacy to help ours,” Lorrey said.

The vendor's chief environmental officer, Lucas Joppa, said NIWA's was a project that could quite literally be world-changing.

“This project will bring inanimate weather data to life in a way everyone can understand, something that’s more vital than ever in an age of such climate uncertainty," he said.

“I believe technology has a huge role to play in shining a light on these types of issues, and grantees such as NIWA are providing the solutions that we get really excited about.”

The algorithms used to determine what a symbol is — a 7 or a 1, for instance — need to be accurate, and for that there needs to be sufficient training data of a high standard, Lorrey said.

The data captured through the AI for Earth grant will make the process of making deeper and more diverse training sets for AI handwriting recognition faster and easier.