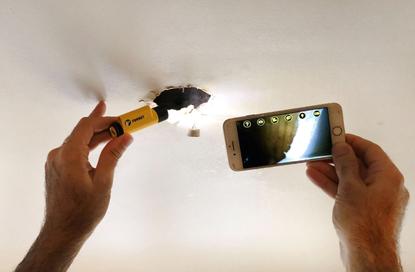 Auckland-based tech company Cable Ferret has been recognised as a leading innovator in its field, picking up a platinum award at a Las Vegas conference.

The award was presented for its Ferret WiFi, product, which the company claims is the world’s first combination compact wireless inspection camera and cable pulling tool.

With a built in WiFi hotspot and adjustable bright LEDs the Ferret WiFi is designed to provide faster close up visual inspections and faster cable pulling in dark confined and out of reach places for electricians, home inspectors, cabling and installation professionals, plumbers, builders, DIY and other trades.

Users can install an app on their smart device to view video of the area being inspected.

The award was presented to Andrew Wigney, president and innovator of the Ferret, and to Therese McNaughten, VP of marketing and brand strategy at the Building Industry Consulting Service International 2019 fall Conference in Las Vegas this week.

The Cable Ferret team has been on an extended roadshow across the US, attending multiple trade and industry shows.

The win was the company's second this year after collecting the product of the year in specialty tools at the Electrical Contractor and Maintenance conference.

"Cable Ferret are extremely honoured to be recognised as leaders in innovation and to receive this sort of recognition from industry professionals globally is a credit to all our global team and our distribution partners," McNaughton said.