Remember the problematic rollout of last year's update to Windows 10? Microsoft would just as soon forget it happened, and hopes users do, too 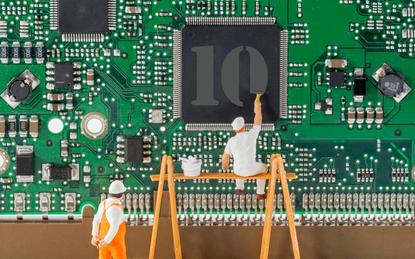 As expected, Microsoft never put Windows 10 1809 on a majority of users' PCs, instead sidestepping the problem-hounded upgrade that was delayed by months earlier this year.

According to AdDuplex, a Lithuanian company whose metrics technology is embedded in thousands of Windows Store apps, Windows 10 1809 powered 26 per cent of surveyed Windows 10 systems as of September 25.

The decline from August was small, only three percentage points, yet it was the largest since the version peaked in May.

Windows 10 1809, unlike its predecessors, never powered even a third of all Windows 10 systems: It peaked at 31 per cent in May. That was at odds with its immediate precursor, Windows 10 1803, which hit 90 per cent for a high, and the upgrade before that, version 1709, which pegged 92 per cent before falling.

Instead, Microsoft pushed Windows 10 1809 into the background, for all intents skipping past it to instead offer Windows 10 1903 to most users after it was released.

That upgrade, also known as "Windows 10 May 2019 Update" (Microsoft abandoned descriptive naming at the end of 2017), got a slow start but by August was on 33 per cent of all Windows 10 machines. A 13-percentage point increase in September pushed that number to 46 per cent, making 1903 the most-installed version of Windows 10.

The switcheroo from the usual meant that Microsoft never aggressively delivered Windows 10 1809 to its forerunner, 1803 - last year's spring upgrade - as it should have by former practice.

Microsoft is responsible for the shunning of 1809; it isn't something that happened organically.

Why? Because through 1809's release - originally slated for October 2018 but effectively delayed until early 2019 because of problems, including data loss experienced by customers who upgraded before the company shut off the spigot - Microsoft was the sole determiner of how quickly a feature upgrade was adopted by unmanaged PCs.

Because it declined to follow its own up-to-then rules, millions of Windows 10 users were left running 1803 rather than upgraded to 1809.

That was a problem because the former was scheduled to fall off the support list on November 12, 2019, at least for Windows 10 Home and Windows 10 Pro users. And if they weren't running 1809 they were soon going to be forced to upgrade to something else. Like 1903.

Normally, that wouldn't be a problem: There was plenty of time between May 21 - when 1903 debuted - and November 12 to push that version to everyone, including the people running 1803. Remember, the six-month interval between those two dates was exactly the same as the usual six-month stretch between feature upgrades.

But Microsoft had monkeyed up the cadence by, in April, suddenly handing to users a considerable amount of control over upgrade timing with the "Download and install now" option in Windows 10 Home (and Windows 10 Pro users who relied on Windows Update).

The option let them decide when to download and install a feature upgrade, a responsibility Microsoft had jealously guarded.

Could Microsoft assume that users would upgrade in time so that they stayed in support? No. Why not? Because users had never voluntarily migrated from one version of Windows to another version in such a short amount of time. Instead, they took years to affect a voluntary change. Don't believe it? Just look at the time it's taken to reduce Windows 7 from its 2015 peak of 61 per cent.

Faced with the choice between a) giving Windows 10 users, all of them, including Home and Pro, freedom to choose their upgrade moment and b) total chaos, with huge portions of Windows 10's consumer base unsupported, unprotected and under attack from hackers, Microsoft did the right thing and picked the former. But it needed a mechanism to keep the chaos at bay.

That's why the company reserved for itself an exception to "Download and install now." It would intervene and initiate an auto-install when the version on the machine neared end of support.

Microsoft announced the start of 1803-to-1903 forced upgrades on July 16 or four months before 1803's slated retirement.

The AdDuplex data reflected that, with 1903 climbing five points in July (while 1803 declined just over four points) but exploding with gains in August (up almost 22 points, as 1803 fell by almost 21 percentage points).

Notice the nearly tit-for-tat gain/loss when comparing Windows 10 1903 and 1803, another sign of Microsoft's "interference" in the upgrade of the former.

With less than two months before Windows 10 1803 leaves support, Microsoft still has work to do, although that work looks manageable. Undoubtedly, there will be some running 1803 after the support deadline, including PCs that cannot be upgraded because of unresolvable issues or those Microsoft doesn't address in time. Check here for the most-current list of blocking problems.

Interestingly, the biggest takeaways from the entire skip-1809-and-go-directly-to-1903 muddle was Microsoft showing customers that it is possible to blow by one of the every-six-months feature upgrades.

And that the idea that every feature upgrade needed to be accepted and installed to serve the Windows-as-a-Service (WaaS) model was on a shaky foundation. And that customers would first tolerate, then embrace, the rapid release tempo.

And finally, it showed that Microsoft can be a master in making lemonade from lemons, or at least convincing customers that what they had in hand was lemonade.