Company-X takes on RealWear across A/NZ 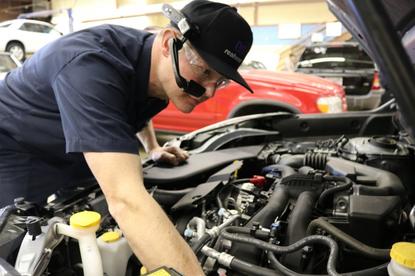 Hamilton-based Company-X has become the Australasian reseller for RealWear, the manufacturer of head-mounted tablets for hands-free applications.

The deal boosts Company-X's capabilities in AR/VR after its recent buy-out of augmented and virtual reality specialist Pepper Creative.

RealWear's lightweight headset has a narrow boom arm with a micro-display that appears as though the worker is viewing a 7-inch tablet screen.

The screen can be positioned just below line of sight, so the user can easily glance at it and all inputs are voice-activated for completely hands-free use.

RealWear manufactures the HMT-1s head-mounted tablet as well as the HMT-1Z1, which is safe in areas where explosive gasses are present. Both are designed to maintain situational awareness while improving productivity.

“It runs off the Android operating system and apps, so we can write customised apps for our clients, exactly like you can for a tablet."

Bauerfeind said he was sceptical of the smaller screen initially but the concerns proved unfounded as the system is user friendly and the screen is mostly a reference check for the voice commands.

“We are pleased to find a partner that adds a powerful sales channel in the Australian and New Zealand market, with real experience in the application and use-cases of wearable technology,” said RealWear executive vice president Rocky Scales.

The channel will help accelerate RealWear’s market growth and expand its user base and ecosystem.

“Being part of Company-X strengthens our ability to develop apps for use with the HMT headsets, including back-end connectivity and databases,” said Bauerfeind.

“We can build the apps to incorporate functions clients need in one place, rather than having to step out of the app and use other tools, such as taking photos or transcribing observations that the user can narrate into the device."

A proof of concept project is already under way for off-site monitoring.

“The challenge was to help technicians onsite at remote distribution hubs," Bauerfeind said. "The technicians carry out repair and maintenance on site so using the HMT needs no computer or laptop.

"You can’t take a laptop into an explosive area, which was needed here, but you can take the head-mounted tablet, and the HMT-1Z1 model is certified as intrinsically safe.”

The device can also be used just like a smartphone for remote voice calls and for sharing a camera feed for picture-in-picture video calling, allowing a technician to discuss an issue, record it and save it.

Information stored in the device is synced back to their corporate systems.