The Instillery and Origin unite in mega merger 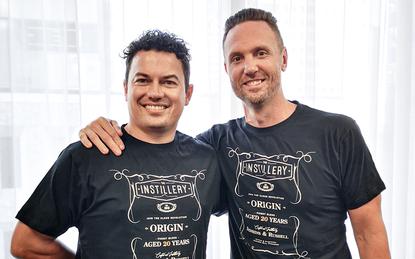 The Instillery and Origin have unveiled plans to merge businesses to create an end-to-end technology provider capable of challenging tier-1 incumbents in New Zealand.

Operating under The Instillery brand, the new-look business will hold revenues in excess of $40 million, bringing together more than 200 staff across the country, with offices in Auckland, Hamilton, Tauranga and New Plymouth, in addition to Palmerston North, Napier, Wellington and Christchurch.

“The merger is a statement of intent of a desire to lead in this cloud revolution,” Jenkins said. “Emerging technologies lead by cloud and automation continue to disrupt and create new opportunities. The tech sector here in Aotearoa has been screaming for change and a genuine alternative option to partner with.

“Trust and confidence have never been more critical to our clients as they embark on their cloud journey, so Michael and the Origin teams' 20 years of experience in this field across both security consulting and managed services is massively compelling.”

The merger follows the coming together of The Instillery and Vo2 in July 2018, and Origin’s acquisition of security and network specialist Optinet in October 2015.

“Origin has 20 years of experience in delivering innovative solutions and managed services,” Russell added. “The merger is an exciting opportunity to take another step towards where our customers need us to be with the growth of cloud, leveraging the unrivalled experience The Instillery have in this area.”

Going to market as a cloud services provider, The Instillery specialises in the delivery of public cloud and DevOps offerings, backed up by SD-WAN and security expertise.

Specific to cloud, the business focuses on migration and optimisation through a multi-cloud approach across Amazon Web Services, Microsoft Azure and Google Cloud Platform. Further capabilities in managed services and modern workplace deployments -- such as Office 365 -- have also been enhanced through the merger with Vo2.

On the flip side, Origin has deep heritage in managed services, private cloud, network and security, with the acquisition of Optinet offering a fully managed threat prevention, detection and response service to enterprise businesses.

Looking ahead, Jenkins said the provider will address “largely unmet” demand in the enterprise space, billed as a key area of growth for the business.

“We know that large businesses including enterprise, local government and central government agencies, are looking for a fresh, agile approach that allows them to move faster,” Jenkins explained. “Velocity with confidence is in our DNA. We’re excited about the immediate opportunity to scale to up to help more businesses innovate and realise the well-documented benefits of cloud.”

Today, Jenkins said most enterprise organisations utilise a “hybrid, multi-cloud approach”, an approach the provider intends to capitalise on through the added capabilities of Origin.

“Origin’s strength in security, network design and optimisation, combined with our agnostic approach to cloud, means that customers will get the proven formula, tailored for their business, irrespective of where they are on their cloud journey,” Jenkins said.

From a customer standpoint, key clients for The Instillery include TSB Bank, Auckland Council and Fonterra, alongside Eat My Lunch, the Department of Conversation and Sanford.

“The Instillery has worked with us from the start of our cloud journey, from helping us build our first production systems on AWS, then automating their deployment,” added Hamish Archer, general manager of technology at TSB Bank.

”Keeping security in front of mind and having local skills is very important to us and has been a key part of the engagement with The Instillery. The access to further depth and capability through the merger with Origin opens up further opportunities to grow what we do together.”

“With this merger, the two companies combined will provide Kotahi with a key strategic partner that can not only support its environments and protect it through its security practices, but they can also now further challenge us on our cloud journey,” said Wayne Bloem, head of operational excellence, Kotahi.

“We look for partners that can push us and drive us beyond our current capabilities. And with this merger, we now will have a partner that has a global reach in this space and further drive Kotahi’s cloud priorities. I truly think this will create a partner to be reckoned with.”

Originally launched from a garage in West Auckland as Origin Business Solutions (OBS) in 2000, Origin has evolved into one of the leading technology specialists in the country.

In 2005, the mid-market specialist launched New Zealand's first fixed fee IT service, Onefee, before rebranding a year later to Origin IT, backed by another office move to Apollo Drive, Albany in 2007.

Gold certification from Microsoft soon followed before the provider racked up a new milestone, in servicing the IT needs of 3,000 end-users through a team of 45 specialists by 2010.

Such growth continued to reach 4,500 end-users within the space of two years, as the team surpassed the 50 staff mark, before rebranding to Origin in 2012.

A new headquarters on College Hill in central Auckland followed in 2014, with 2015 proving a memorable year for the new-look business. In housing 120 employees and serving 6,000 end-users in five continents, Origin - who also acquired Optinet at this time - was awarded the Mid-Market Partner of the Year honour at the inaugural Reseller News Innovation Awards.

New launch offerings through HUM -- managed IT support and security for small businesses -- and Origin Security came in 2017 and 2018 respectively, cementing Origin’s position as a standout Kiwi technology provider.

Meanwhile, The Instillery was founded six years ago from a co-working space in Parnell before progressing into a specialised cloud player in New Zealand.

As revealed by Reseller News, the business joined forces with Vo2 Group in June 2018, in a merger designed to drive wider adoption of cloud technologies across the country.

From an industry perspective, the provider has taken home four Reseller News Innovation Awards within the space of four years, recognised as the leading Mid-Market, Cloud and Export partner in 2016, 2017 and 2018 respectively, with Jenkins also honoured for Management Excellent in 2018.