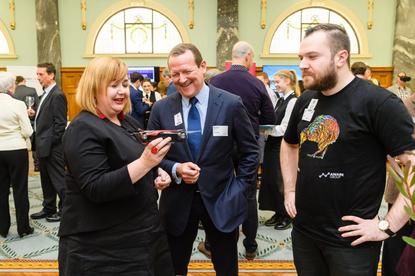 The research featured in a showcase of Kiwi tech innovation at Parliament last Wednesday which aimed to demonstrate the achievements of local innovators and inspire policymakers to explore new ideas.

It showed that Microsoft's partners generate billions of dollars for the local economy, Sheers said.

“New Zealand, like the rest of the world, is facing an era of profoundly disruptive environmental, social and economic change," said Sheers. "New technologies will play a critical role in driving these changes, but also open up opportunities.”

Showcase attendees, including event sponsor and minister for government digital services Megan Woods and other MPs, were shown around five “hubs” demonstrating projects with potential to change the planet and transform education.

Among the presenters was Camden Howitt, co-founder of Sustainable Coastlines, who joined software developers Enlighten Designs to show how artificial intelligence is boosting community efforts to combat waste on beaches.

The project was recognised by the award of an "AI for Earth" grant by Microsoft president Brad Smith on a recent visit to New Zealand.

Aware Group have brought the FarmBeats technology to New Zealand, and it is also being used in the US, Brazil, Kenya and India, helping farmers and growers make the most of natural resources using less water, fertilisers or herbicides.

Representatives from Unify Solutions and the Ministry of Education detailed an award-winning project that provided secure online access for more than 70,000 members of the education sector.