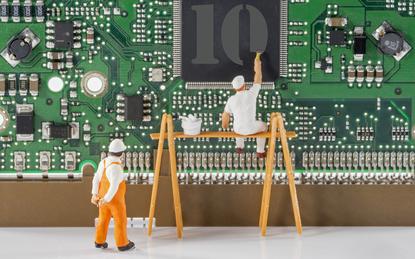 Microsoft has quietly alerted customers running last year's Windows 10 version 1803 that it would soon start a forced upgrade to the latest feature refresh.

In a note added to the Windows release health dashboard on 18 June, Microsoft wrote: "We are now beginning to build and train the machine learning (ML) based rollout process to update devices running the April 2018 Update, and earlier versions of Windows 10, to ensure we can continue to service these devices.”

The move was expected, as last month Microsoft said that starting in late June it would begin upgrading Windows 10 Home PCs - and perhaps Windows 10 Pro systems as well - from 1803, the April 2018 Update, to this year's 1903.

Previously, Computerworld had pegged 25 June - the fourth and final Tuesday of the month - as the likeliest date for Microsoft to begin the forced upgrades of 1803. Microsoft uses the second day of each week to deliver update and upgrades, notably the second week of each month, the traditional "Patch Tuesday," to issue security fixes.

Normally, the Home 1803 PCs would have been upgraded to the immediate successor, last fall's Windows 10 October 2018 Update, aka 1809, long before now.

But because 1809 harboured a destructive bug, requiring Microsoft to yank it from distribution and not return it for re-release until early 2019, three months behind schedule, it seemed the company simply gave up on 1809. According to what little outside information exists, in March Microsoft greatly slowed its delivery of 1809 to users of Windows 10 1803.

But even as Microsoft turned over more control than ever before to Windows 10 Home users and those running unmanaged Windows 10 Pro PCs, the firm reserved the right to do things the old fashioned way.

As the Windows 10 version powering a PC neared end of support - Microsoft never nailed down what "near" meant in terms of weeks or months - the company would intervene as it always did before, to upgrade the machine and keep patches flowing.

Assuming Computerworld has correctly interpreted Microsoft's pronouncements of DaIN, the forcible upgrade and the 1803-to-1903 transition in particular - for Microsoft has been closed-mouthed about anything but the broadest strokes - this will become the new normal.

Once Microsoft rolls out a feature upgrade, users will themselves decide whether to acquire and adopt it and if so, when they do.

If they decline a feature upgrade - by simply doing nothing, since DaIN shifts deployment to an opt-in approach - they will continue to run what now powers their Windows 10 PC. At or around the four-to-five-months-remaining mark Microsoft will take things in its own hands and start to upgrade PCs to keep them in support.

The following figure shows how this will work for the next several feature upgrades.

Note: One of the side effects of DaIN and the forced upgrades is that users who do nothing will be moved to an annual upgrade schedule, half the frequency of before.

It's not unusual for Microsoft to leave lots of unanswered questions. In fact, that's the company's modus operandi: It typically announces a new Windows process or policy but withholds the details, which eventually are gleaned from its actual operation or from documentation, or both.

For example, Microsoft has not specified how much in advance of a feature upgrade's end-of-support date it will begin to forcibly upgrade customers. This is one of the biggest unknowns in DaIN's methodology, but far from the only mystery.

Computerworld columnist Woody Leonard highlighted others, such as "Can you simply ignore the link until Nov. 10, and stay on 1803?" and "Will the ML pusher respect the metered connection setting?"

"Yes" is an unlikely answer for either. If Microsoft means to keep systems in support, letting users wait until the last minute would contradict that; if DaIN works as advertised, the metered connection setting won't be necessary (and wouldn't be allowed to interfere, one would think, with the forced upgrade during the last four or five months of support).

It's unclear whether the DaIN decision was linked to the debacle of Windows 10 1809 or if Microsoft had decided to give upgrade control to users long before. The close timing suggested the latter, as it seemed that it would have been difficult for Microsoft to decide on, then implement DaIN in just four or five months.

There is no question, though, that DaIN, particularly the rule that lets Microsoft upgrade without user approval near the end of support, helped solve the 1809 problem.

Rather than back everything up - getting 1809 onto 1803 machines months late, which would have a domino effect - it let Microsoft gracefully (well, relatively) skip 1809 and go straight to 1903, putting the schedule almost back on track.