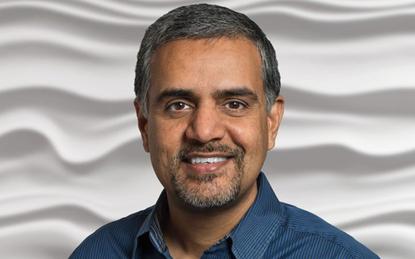 Hewlett Packard Enterprise (HPE) networking subsidiary Aruba recently hosted over 2,000 people in Croatia's Amadria Park for its tenth EMEA Atmosphere event, with co-founder and president Keerti Melkote taking the opportunity to outline the many ways organisations are creating new experiences 'at the edge'.

Edge computing can loosely be defined as when compute and processing is carried out nearer the user or device, which is especially prevalent in areas where low latency is required, such as launching a fleet of autonomous vehicles.

"It is technology that we are all used to, that we're deploying outside of the data centre in support of delivering business support systems to enhance experiences or to enhance business outcomes at the point of action," Melkote explained.

The networking firm believes edge will become the next big enterprise trend, with big-name organisations already making an impact with the emerging technology.

One example is Amazon Go. Although not yet globally available, the online retail giant has launched a handful of physical stores as it experiments with the power of the edge.

An organisation which Melkote describes as "the poster child of the cloud revolution" is now transforming the shopping experience using technologies such as barcode scanning and facial recognition to eliminate traditional checkout scanning.

"It's not just limited to any single vertical," he added, "the experience is not just about the end user experience, although that is at the tip of the spear.

"It is also about the operator experience that people in this room deliver to actually make it possible. And how we as Aruba build technology that allows you to deliver on these great end-user experience in a way that is pleasing for you."

Melkote identifies mobile, cloud and IoT as the core components driving the move towards edge networks.

"These are mobile first, cloud-native, IoT enabled and autonomous - all of which are the motivators behind the Aruba architecture," he said.

"The next wave is really about integrating IoT in this all-wireless workplace and to me, IoT takes the form of both wired and wireless. To enable the next wave of innovation in this mobile-first workplace, we introduced Wi-Fi 6 - this is the next generation of Wi-Fi technology."

According to Melkote, Wi-Fi 6 is now an integral part for next generation 5G connectivity, and with added access points it can be paired with multiple switches to add more IoT devices.

"Increasingly, what we're finding is to serve the capacity needs of everything out there you have to bring together the Wi-Fi technologies in buildings and the cellular technologies outside of buildings in a converged manner," he said. "For the first time, Wi-Fi has become an integral part of the 5G radio access infrastructure.

"With Wi-Fi 6 access points, we have the opportunity to integrate that IoT capability right into the wireless infrastructure itself. This is the way which you'll start to see a lot more IoT get integrated into the infrastructure."

This could be implemented in buildings such as retail stores or hotels to improve the hospitality experience. For instance, the adoption of digital locks with mobile apps for unlocking doors could be applied by integrating IoT capabilities into wireless infrastructure within a hotel.

"We've created this platform content insight, which hooks into the Aruba Wi-Fi infrastructure from the cloud, collects data from the Wi-Fi network and analyses the data," he said. "It compares your specific network data against standard best practices and gives you recommendations and a score of how your network is performing."

This content insight platform is expected to help organisations to understand the level of experience users receive from the network.