Radfords aims for global markets with help of NZTE 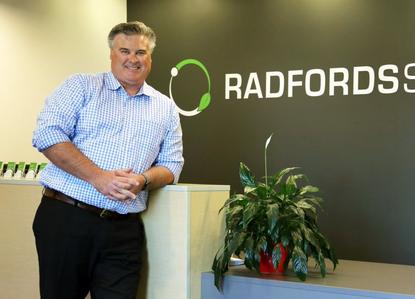 Radfords, which was founded in 1989 in the Bay of Plenty, is now a "focus customer" by NZTE, which will help the company derive deeper insights into various global markets and to identify opportunities, build strong relationships and tailor product innovation.

Chief executive officer Adam Cuming said the collaboration would drive privately owned Radfords' growth from its traditional New Zealand base to existing and expanding markets including Australia, Europe, the United States and South America during the next five years.

The company is planning to ride an international wave of consumer demand for fresh, healthy produce where traceability from the field through the packhouse to outbound markets is required.

Radfords has worked with NZTE for several years in a networking capacity, Cuming said. However, after sharing its ambitions for growth, NZTE brought an intensive focus to provide market intelligence of target markets.

Radfords already had a footprint in Australia and had identified a technology gap in the central markets' space where most wholesalers continued to manually record data, Cuming said.

Australia's domestic consumer market is far larger than New Zealand's, which, in contrast, has a more finely developed export background.

"Approximately 1,500 Australian fresh produce wholesalers exist, many of which are vertically integrated. This aligns with Radfords' extensive knowledge and suite of products that provide full traceability along the supply chain," Cuming said.

"By reviewing year-on-year macro data for fresh produce, you can also see an increasing proportion of total sales moving to export markets where margins are higher for quality produce. This also plays well with our capabilities in matching inventory to various export compliance requirements."

"In coming months, we'll talk to NZTE reps in Europe and South America to unpick fresh produce opportunities for Radfords there," he said.

Radfords had "cut its teeth" on New Zealand's kiwifruit industry including deployment of its software products to all of the post-harvest sector that supplies Zespri's supply chain out of New Zealand, Italy, France, Korea and Japan.