Leo Lynch takes on most of her daily activities 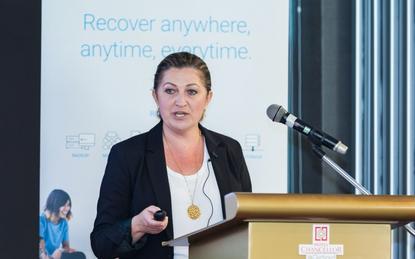 Storage and data protection vendor StorageCraft has confirmed the departure of Marina Brook, who had been the Asia Pacific head of sales for the past two years.

"After 6 and half years with StorageCraft, I wanted to pursue other career opportunities," Brook told ARN. "Starting with the business as the distribution and channel manager and working my way up to become the head of sales for APAC for the last 2 years.

"Taking on the responsibility for the business across the entire region has helped shape me to become a better leader. I now leave, knowing that I have built a great team and an environment that is collaborative, innovative and full of creativity,"she said.

Brook has also revealed she is in the middle of "a number of conversations" with different technology companies.

She joined StorageCraft in 2013 as a distribution and channel manager, a role she held for four years.

With more than 20 years in the industry, she has worked for KPMG's Hands-On Systems and Datawatch's WorkGroup System in the beginning of her career. Her first channel role was with Open Text's Hummingbird.

In 2001 she took on the role of channel manager at ACA Pacific, one of StorageCraft's distributors in Australia. She later moved on to Ingram Micro where she was a senior product manager for more than three years.

Lastly, before joining the vendor, she worked for Dicker Data's Express Data also as a senior product manager.

StorageCraft VP of sales EMEA and APAC Andy Zollo explained to ARN that the changes in the structure of the company were a result of many factors. The company has worked to expand into new markets and decided to maximise the number of resources it has on the street, liaise with customers, partners and end users.

"So we decided to flatten the management structure, quite simply," Zollo said. "We looked at it and thought 'this makes sense, no point in having too many leaders in the organisation' and actually let's reinvest that money."

Leo Lynch, StorageCraft director of sales A/NZ, has taken on most of Brook's day-to-day job.

StorageCraft has been investing in its A/NZ business by hiring new marketing, pre-sales, territory account manager and sales and support staff.

The investment follows the vendor's recent launch of a new product suite targeting mid-market and lower end of enterprise. As a result, the vendor is now looking for people with a different skill-set than before, StorageCraft director of sales A/NZ Leo Lynch told ARN.

"We are going to bring on some new resources and we need different skills to help us take that to market so we are going to be recruiting different types of partners and customers," Lynch told ARN.