Rugby Australia will rely on a suite of digital tools, analytics and data visualisation to help lift the Rugby World Cup in Japan later this year 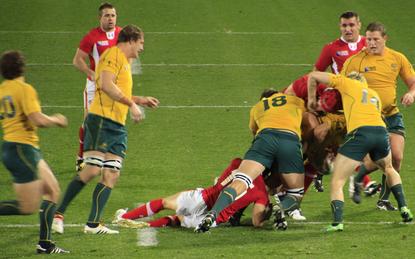 The Wallabies are aiming to lead the Rugby World Cup data wars.

Rugby Australia will rely on a suite of digital tools, analytics and data visualisation to help lift the Rugby World Cup in Japan later this year.

Data collected from sensors such as GPS trackers, force plates in gyms to measure strength and "military-grade" sleep trackers among others are being used to help coach Michael Cheika make informed choices and test any "'unconscious bias", AWS Summit-goers in Sydney heard today.

Many teams use such collection, but the Rugby Australia is aiming for it to be usable and accessible through an easy to understand and configure analysis portal from Tableau.

"Popularity and funding in the world of sport is based on one thing, and that's winning," said said Kevin Stafford, head of technology at Rugby Australia.

"Fans love winners, and winners fill stadiums, and full stadiums give us the revenue to put back into the game and ultimately grow us as a sport.

"Like any business, we believe that data and strategy will ultimately lead to success."

Data can improve performance on and off the pitch, he added.

That meant there was six days until the product release, to talk in software development terms - six days to turn them into a cohesive team.

But work on that had already begun in the form of data analysis. Information from feeder Super Rugby team was available, but the system lacked efficiency and consistency.

There was a lot of information being exchanged and captured, however in a very siloed manner and with lots of manual handling. Head coach Cheika was bombarded with too much disparate information, making it difficult for him to "distinguish the signal from the noise".

Data was the key to unlocking future success and to give the team the edge it had to be better managed to be impactful.

"Our ambition was to create a world-class analytics platform that ultimately drove on-field success, matching our nation's ability and desire to get back to the top of world rugby," Garvey said.

The aim was to reduce the time spent behind computer screens and increased quality coaching experience between staff and players.

A sneak peek at the results revealed dashboards showing analysis developed of the Wallabies first game of the season against South Africa in July.

"Now, before I start are there any South Africans in the room," asked Garvey. "Ear-muffs please."

In the portal, the Springboks' kicking game, which delivered the third highest kicking stats in world rugby last year, was charted by player, by field position or zone where the kick was taken and where the ball landed.

Countering that, the Wallabies focused on having great catchers and powerful counter-attacking runners at the ready, again charted by name and strength.

"We can try and turn a strength of their into an opportunity for us to attack from," Garvey said.

Individual player stats can be accessed from the same dashboard with a mouse-click.

As soon as the referee is known, quick access to their game is also available and any apparent trends such as what he awards penalties for, how trigger happy he is with yellow cards and any contentious areas that may need clarification.

Previously, all this could have been delivered in Excel or PDF in six or seven separate reports. The new system is a one-stop shop and "access to what matters is only a few clicks away".

Questions such as who plays better with who and what measures correlate to success can now be tackled.

"The information we have at our fingertips would make the former superstars of the game shake their heads in amazement," Stafford said.

Access has been democratised not just for coaches but for players, medical staff and sports scientists.

Accenture and UTS both contributed to the project, resulting in a 12-week proof of concept.

The scale of the data is around 11 million data points from GPS data alone, stored on AWS' S3 service and processed on the company's Lamda serverless computing platform.