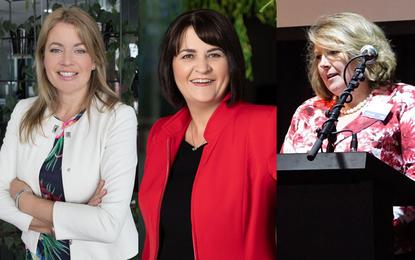 Three female leaders have assumed positions of power within the technology industry in 2019, following executive changes at Microsoft, Spark and IBM in New Zealand.

The appointments show a market moving - albeit slowly - in the right direction in terms of establishing a more diverse industry at leadership level.

In the new role, Bowden is tasked with building new relationships with partners across the country, while managing existing alliances and driving growth across services and platforms such as Azure, Office 365 and Dynamics 365.

Meanwhile, Jolie Hodson will assume the role of CEO of Spark effective 1 July, replacing Simon Moutter who announced his intention to resign in early April.

Hodson joined Spark in 2013 and brings a broad range of experience gained through a number of senior positions at the company, having spearheaded major programmes related to business transformation, while driving growth strategies in cloud and IT services.

Rounding off the appointments, Sallie Purser was recruited as channel and digital leader of New Zealand at IBM earlier this year, as part of plans to deepen partner engagement in 2019.

Purser joined IBM in 1986, working in every division of the vendor across New Zealand during the past three decades, with strong ties into the channel business.

Most recently, Wellington-based Purser was operations executive - essentially acting as local COO - with a responsibility for supporting the execution and management of the IBM’s sales strategy, alongside management systems and programs.

Outside of the channel, Auckland company, Dexibit, recently revealed that 50 per cent of its staff are women.

The big data specialists chief executive Angie Judge said half their staff spread across Auckland, Washington and London are females, represented in all business units including data science, and engineering - their board is 60 per cent women.

According to NZ Tech, research now shows that new companies with 200 per cent or more growth, are 75 per cent more likely to have a female founder.

“Technology is an amazing career for anyone, particularly in today’s times where we’re working on incredibly exciting areas like artificial intelligence,” Judge said.

“As a woman, many of our strong suits, like communication, multi-tasking and thinking with the end user in mind are surprisingly rare but especially important skills to be successful in tech. So as individuals we can really have an impact in the teams we contribute to and particularly when we can lead others.”

Another Auckland firm, Vend, has more than 200 staff across five offices globally, of which 41 per cent are female and 59 per cent male.

Vend founder Vaughan Roswell said there is still a challenge in technology companies where teams are still predominantly male.

“However, this is changing," he added. "More and more women are entering product and tech roles.

"There is still a lot more to do for the industry to be considered open and welcoming of all people from all genders and backgrounds, but there is a willingness to embrace more diversity and so that needs to be positively encouraged."

Furthermore, earlier reports have found tech firms that have equal number of women and men are up to 40 per cent more profitable.