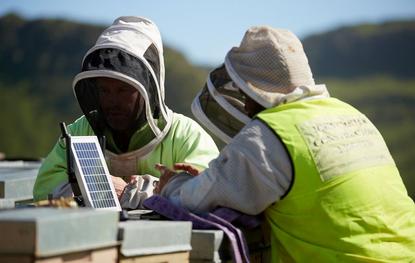 Reseller News award-winner ModuSense has launched an Internet of Things (IoT) platform for beekeepers, which was already being used in pre-production at Comvita among others.

The technology helps commercial bee keepers get more out of their hives by providing real-time data on weight, temperature and humidity.

Until now most of New Zealand’s 880,000 registered beehives have produced honey without beekeepers knowing how the hive was operating until the day of harvest.

ModuSense founder Bruce Trevarthen said the goal was to help beekeepers better understand their hives, the site they’re in and how the bees themselves are performing and so produce a better yield at harvest time and to reduce costs along the way.

“These hives tend to be placed in remote, difficult-to-access locations, making them hard to monitor," he said. "That means it’s not until the bee keeper goes in to retrieve the hive that they can see how the hive has performed.

"We wanted to provide bee keepers with a way of checking up on the hive without having to tramp in to the site or fly in by helicopter, something that is costly in terms of time and money."

ModuSense provides commercial-grade equipment that can tell the beekeeper just how well the hive is performing and when to go in to get the maximum yield.

“We place sensors in the hive to test for temperature and humidity and put the whole thing on a purpose built scale to measure weight," Trevarthen said.

Information is then sent back to the beekeeper via wireless signal or by satellite for truly remote operations.

“We can see what times of the day the bees head out, what time of day they return, how much honey is being produced and whether the hive is active or not," Trevarthen added. "In our trials we’ve seen commercial operators make the call to keep hives working when they’re doing well and seen them intervene when a hive isn’t producing."

Furthermore, an easy-to-understand dashboard provides beekeepers with the information they need.

With phase one now proven, ModuSense is looking at future additions to the suite.

“We’re working with our commercial partners on what they would like to see added in terms of functionality," Trevarthen said. "The partnership approach means we’re not wasting their time and they can tell us exactly what’s relevant to the commercial operation."