Why the UK's Telegraph is going all in with Google Cloud 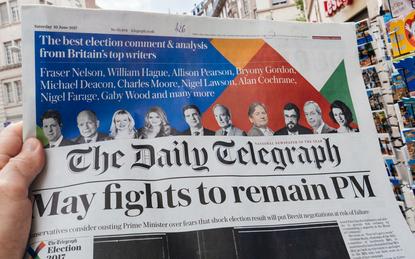 The UK's Telegraph newspaper is migrating the vast majority of its technology stack to the Google Cloud Platform (GCP) this year, marking a clear move away from the market leader Amazon Web Services (AWS) in an attempt to drive more paying subscribers, deliver its news content faster, leverage Google's machine learning technology and, of course, cut costs.

Speaking to Computerworld UK, Chris Taylor, CIO at the Telegraph Media Group, framed the decision as something of a future bet on Google's capabilities.

"Amazon is a fine organisation, but interestingly in the IaaS space, GCP is the fast follower and it has served us well to be an early friend of that," he says.

"I think the technology is better by small degrees and we want to work with an organisation that is more hungry. If they go on to dominate the sector it lays the groundwork to have a successful relationship."

More specifically, Taylor hinted at AWS being too focused on getting large companies to move to the cloud: "Many providers are still trying to convince companies to move for the first time and often the go to market strategy doesn't cater for that mature cloud customer. We found the GCP relationship did more strongly relate to that."

He also believes that Google's expertise around artificial intelligence and machine learning set it apart from the other big three vendors (Microsoft being the second-placed in the market).

"They are leading the way in the provision of AI and Ml services," he says. "I think they have an edge there."

This has long been the story around Google Cloud Platform, that it is great for advanced, edge use cases around machine learning but may not be the best overall platform, which often leads to enterprises adopting it as part of a multi-cloud strategy.

This is why the Telegraph's decision is so striking in that it is taking this as a positive indicator of future performance, and betting big on that platform accordingly.

The Telegraph started working with Google as an early Google Apps customer (now G Suite) since 2008, and then Google Cloud in 2016 to better analyse its customer's reading habits and advertising performance by implementing a BigQuery data lake.

Now it will move its core systems and consumer-facing digital products onto Google Cloud infrastructure.

Matt McNeill, customer engineering director for Google Cloud in the UK and Ireland added: "The Telegraph has shown an appetite to look for and understand the value these new technologies bring. So working with them is important for us to understand how the technologies we bring out manifest in an industry like the media."

The migration itself will be pretty aggressive but won't be a 'big bang', instead moving service by service to the new infrastructure platform with an ambitious timeline to be finished by the middle of this year.

The core components of this migration will be the Telegraph's consumer-facing digital products, so website and apps, which will all be moved "environment by environment".

"Testing, staging, performance etc as we go," he said. "It's a natural sequence we can follow to move those over."

He admits that a few systems will remain in its own data centres, such as its legacy newspaper production system, but the idea is to go pretty much all-in on Google, while also remaining conscious of the risks of vendor lock-in.

"We value broad partnerships with companies and also continue to have a positive relationship with Amazon, Apple, Adobe, to name just a few," he said, "so maintaining a mixed ecosystem."

Cost efficiencies, he said, are clearly front of mind when selecting a new vendor, but that "an increase in the speed and agility of engineering teams and the ability to translate that to a faster release cadence" is also a priority.

"We are in the process of doing lots of consumer product work and some core platform engineering to get the best shot at that with our paywall, identity and subscription journeys," he said. The Telegraph doesn't disclose its paying subscribers figure, but last reported 2.5 million registered customers, according to the Press Gazette.

Taylor says the two platforms are "broadly similar, there are nuanced technical differences, but broadly it is analogous", and that "Google has been good at supporting us to do that preparation".

Taylor admits that moving to a new vendor requires something of a skills refresh within the organisation, but was keen to present it to staff, and the media, as a positive.

"We have a good systems engineering and platform engineering team and they have the right general skills, but yes that was primarily in AWS. Very simply we ran a GCP training exercise for a couple of weeks and we put 20-25 people through that course," he explained.

"We are fighting for talent in London, so to make the technology experience here as interesting as possible is better for attracting and retaining key talent, so we saw this as a positive," he added.

On the whole Taylor seems pretty relaxed about the migration itself. "Really honestly it's not something that is keeping me awake at night and I am confident in the prep and the partnership and happy the teams will rise to and overcome any of the challenges," he said.

The Telegraph is already eying some of these Google Cloud AI capabilities mentioned earlier to help staff in its newsroom cut down on time consuming tasks like finding the right image and metatagging.

In his blog post on the topic today, McNeill writes that The Telegraph "will be using AutoML to classify content for journalists and make it more discoverable.

For example, a reporter will be able to bring up relevant assets that link to their stories. It will also apply AutoML to classify Telegraph stock photos to help journalists attach compelling visual content to their stories faster."

The Telegraph also built its personalised MyFeed product from scratch on Google's recently acquired Apigee platform, with Lucian Craciun, head of engineering and technology, platforms at The Telegraph explaining why in his blog post today.

Overall however, Taylor is less interested in bringing lots of new digital products to market, instead focusing on improving its existing products through its newly established DevOps culture. "This migration will help that culture and get engineers fully engaged," he said.