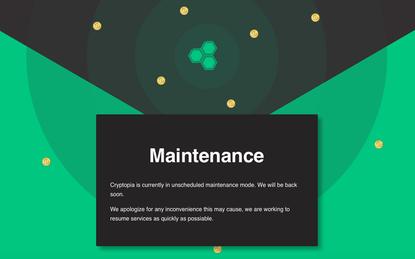 The Cryptopia website is currently in maintenance mode with trading suspended

Police in New Zealand have launched an investigation following a security breach at a Christchurch-based crypto-currency trading company, in response to alleged un-authorised transaction activity.

Revealed via Twitter, Cryptopia told users that it had suffered a “security breach” on January 14, specifically impacting the Cryptopia Exchange and resulting in “significant losses”.

Police were advised late on Tuesday evening of the issue, with the platform currently in maintenance mode, the website down and trading suspended.

“A significant value of crypto-currency may be involved and Police are taking this very seriously,” a statement from New Zealand Police read. “We are currently talking to the company to gain a further understanding of what has occurred.

“A dedicated investigation team is being established in Christchurch including specialist police staff with expertise in this area. Police are also liaising with relevant partner agencies in New Zealand and overseas.”

Police said the investigation is still in its “very early stages”, with an update expected to be provided on Wednesday.

According to Cryptopia, once the issue was identified by staff, the exchange was placed in maintenance mode while the damage was assessed.

“Staff then notified and involved the appropriate Government Agencies, including NZ Police and High Tech Crimes Unit who are jointly and actively investigating the matter as a major crime and they are assisting us with advice,” a company statement read.

“We are committed to getting this resolved as quickly as possible and will keep you all updated every step of the way.”

Established in 2014 by founders Rob Dawson and Adam Clark, the crypto-currency exchange has over two million global users, facilitating deposits, trading and withdrawals of major coins.

Cryptopia also claims to have access to “dynamic charts, live coin information, world class service and the world's largest range of coins”, according to the company’s website.