IBM to move Watson Health to a hybrid cloud 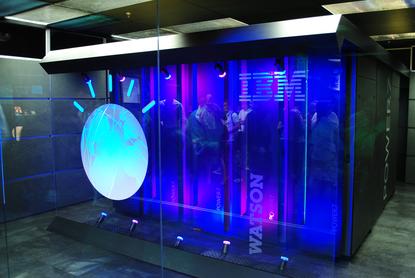 The Veterans Administration has also used Watson for genomics as part of its precision oncology program, which primarily looks for possible new treatments for stage four cancer patients who have exhausted other options.

The artificial intelligence engine has been used to comb through massive data stores from published medical literature, patient medical records and physician notes to help researchers identify new uses for drugs; connect patients to clinical drug trials; and offer up potential treatment options based on previous outcomes of patients with similar heath profiles.

The Watson Health service has been primarily offered by setting up on-premise services in hospitals and other healthcare and research facilities that are closely monitored by IBM staff.

Better healthcare from a hybrid cloud?

"It has become apparent to us that the right answer for healthcare, like so many other industries, is a hybrid cloud because some institutions want their data on [premise] and yet they want to be able to hook to other data sets, public clouds and do big time AI and analytics on the public side," said John Kelly, who took over the IBM Health division last week.

"Now, we have two separate and distinct things," Kelly said. "We have a lot of the data that we acquired [that] sits in on [premise] servers, storage and data centres.

"And then we have a separate public cloud where a lot of our clients put their data, do analytics. Up until now those two things have not talked to each other."

The buyout of Red Hat will become integral to the IBM's hybrid cloud strategy, Kelly said, as many of its clients' private clouds run on Red Hat Linux, and do public clouds, like that offered by IBM. Red Hat brings with it software connect those the two and enable data to be passed back and forth.

Offering a hybrid cloud to healthcare and insurance provider customers of Watson Health will also reduce the need for IBM onsite services, since Watson's AI engine will be exposed through different user interfaces, Kelly said.

IBM will provide the services to go to user sites and move their data to a private cloud,  connect them to IBM's public cloud, and then move that data to a HIPAA-compliant cloud for healthcare use.

Cynthia Burghard, a research director for IDC Health Insights, said "in theory" the more flexibility organisations have as to where they house their workloads, the better it is for them.

"What is confusing to me is that as far as I know the analytic applications that IBM has for healthcare payers and providers are on premise and have not been re-architected for the cloud, so I don't really know what IBM is moving to a cloud infrastructure," Burghard said.

An IBM spokesman said IBM's Watson Health service has 11,000 clinical measures that are part of it analytics suite. Some are on-premise and others are on IBM's cloud, depending on the client's preference and the market segment (such as payers, government agencies, hospital systems, for instance). Traditionally, however, most of those services did begin on premise, he said.

IBM was unable to say when the new hybrid cloud offering would be available.

The first data IBM plans to move is from insurance payer systems.

In 2016, IBM then acquired Truvan Health Analytics for US$2.6 billion. Upon completing all three acquisitions, IBM boasted its Watson Health Cloud housed "one of the world's largest and most diverse collections of health-related data," representing approximately 300 million patient data sets acquired from the three companies.

The largest of those acquisitions was Truvan.

"They're very big in the payer space," Kelly said. "We process payer claims and we have payer records. So, what does it cost for a certain procedure in a state or in a hospital – that is a very rich data set we can apply AI to to dramatically reduce cost."

Once payer data is moved to the hybrid cloud, the electronic medical records (EMRs) acquired through the Explorys acquisition will follow, Kelly said.

Kelly took over what news outlets reported as a troubled Watson Health division from Deborah DiSanzo, who after three years as head of the division moved to IBM Cognitive Solutions' strategy team. (In August, Kelly disputed reports that Watson Health was in trouble after reports claimed the service recommend flawed advice and aren't based on real patient data.

"The acquisition of Red Hat is a game-changer. It changes everything about the cloud market," IBM Chair and CEO Ginni Rometty said in a statement. "IBM will become the world's No. 1 hybrid cloud provider, offering companies the only open cloud solution that will unlock the full value of the cloud for their businesses."

The new hybrid cloud, Kelly said, will enable the healthcare industry to instantaneously gain access to the payer and EMR data in its public cloud and apply Watson's artificial intelligence to perform natural language processing of physicians' notes or medical records.

Hospitals and insurance companies use patient data to determine the kinds of benefit plans they should offer, what those costs will be, if there are preferences for regional healthcare providers and which treatment procedures may be effective for less money.

"And, we can provide rock-solid security in the IBM cloud," Kelly said. "Some of these data now sits in servers and not quick closets but small data centres all over the place. And, lastly, it reduces our cost when we're on the cloud – much more economical for us."