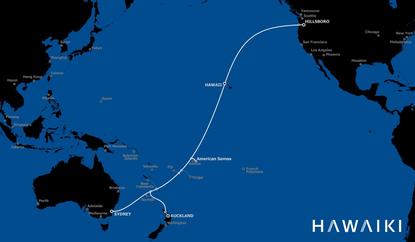 New Zealand's research and education network, REANNZ, is now live on the Hawaiki cable, connecting local researchers with the US and Australia.

At a launch on Friday at the University of Otago, Dr Sandhya Ramrakha from the renowned Dunedin Study, demonstrated how 15,000km Hawaiki Cable capacity is being used to transfer encrypted MRI brain scans to Duke University in the US for analysis.

Over 45 years, the study has tracked the development and health of over 1000 babies born in Dunedin in the early 1970s.

“This neuroimaging collaboration with Duke was made so much easier and seamless with REANNZ’s network and this new capability," Ramrakha said. "Our collaborators at Duke can check the data in real time.”

Duke has made around 37 million file transfer operations in the last month to support daily data synchronisation.

Government-owned REANNZ is a $65 million, 25-year anchor tenant on the Hawaiki Cable, effectively helping to fund a competitor with the Southern Cross Cable, part owned by Spark.

That deal included $15 million contributed by government to support the second cable project.

REANNZ chief executive Nicole Ferguson described Hawaiki as one of the newest and most advanced submarine internet cables in the world and puts local researchers on a par with their global peers.

“As shown by the Dunedin Study, researchers no longer need to resort to using couriers and external hard drives to transfer big complex research around New Zealand or around the world," she said.

“Using the Hawaiki Cable capacity, researchers have a stepping stone to over 2000 universities and research institutes in America, and to a further 17,200 additional locations around the world.”

REANNZ, which in the future will also connect with the Pacific Islands, is part of a collaborative global network of over 120 national and regional research and education networks.

“We are geared to manage big, bursty, complex research traffic and move huge datasets – involving hundreds of gigabytes, terabytes and petabytes – between multiple people, in multiple institutions, in multiple places around the world, “ Ferguson said.