Here's how the OS strategy has changed, and what may be coming next 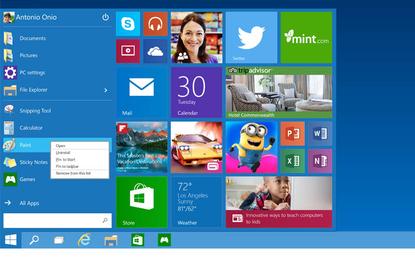 Microsoft has jiggered and rejiggered Windows 10's release and support model enough times to befuddle even the most astute follower.

Each time, the company downplayed what had been true and highlighted what had become the new truth. That's how things work. But it's left users without context.

Here is a brief history of how Microsoft reacted to balking customers and changed the cadence of Windows 10.

Before Microsoft got around to launching Windows 10, it was talking up the development and release cadence, promising that it would roll out a refreshed operating system at the unprecedented rate of three times a year.

In an April 2015 Microsoft-hosted webinar, the company said the impending OS would receive upgrades - those that included new features and functionality - about every four months.

Under that schedule, Windows 10 Home would first receive each feature upgrade; the same version would be served to Windows 10 Pro and Windows 10 Enterprise four months later.

(Microsoft may have selected the four-month span after running into resistance earlier, when in 2014 the company told enterprises that they had to deploy the then-new Windows 8.1 Update within 30 days or be denied future security fixes. After pushback, Microsoft extended the deadline to 120 days, or approximately four months.)

Microsoft admitted that the delay between Windows 10 Home and Windows 10 Pro/Enterprise was so that consumers, shanghaied into testing, could find overlooked bugs - giving engineers time to produce more stable, reliable code before it reached the company's most important customers, businesses.

Each feature upgrade would be supported with monthly security updates for only 12 months. That meant Microsoft would support three consecutive upgrades - N, N-1 and N-2, where N represents the current version - at a time.

Microsoft followed through on its every-four-months pace in 2015 when, after its 29 July 2015 launch of Windows 10, the first feature upgrade was released 10 November 2015.

But the schedule was quickly tossed out the window. During 2016, Microsoft released just one feature upgrade; it was named "Anniversary Update," marked 1607 and began reaching customers 2 August 2016.

By then, Windows 10's initial release model was already a shambles.

Microsoft also began to stress that the calendar wouldn't drive upgrades, seeming to reinforce the idea that fewer upgrades might be issued.

"Although Microsoft is currently planning to release approximately two to three feature upgrades per year, the actual frequency and timing of releases will vary," the firm said in a detailed description of Windows 10's release and maintenance strategy.

But it wasn't until April 2017, about 18 months later, that Microsoft formally announced a twice-a-year schedule for Windows 10's feature upgrades. It also set March and September as the targets for the two annual releases.

The uncertainty Caldas referenced was, of course, a result of Microsoft's own waffling: Two upgrades the year of release, just one the entire year after that.

What was next? One upgrade? Two? More? And when? Questions like those were sore spots for Microsoft's commercial customers. "From an enterprise perspective, predictability is always key," Michael Silver of Gartner said in an interview.

This spring's 1803, for instance, was held up several weeks after a critical "blue screen of death" (BSOD) flaw was discovered. Six months later, 1809 was pulled from distribution early on because Microsoft missed a bug that annihilated users' files during the migration.

Two remains Microsoft's upgrade strategy at this point, but the company's also made moves that can be read as presaging another reduction.

Still wrestling with enterprise customers' complaints, Microsoft last month declared another major change to support, if not to the release cadence.

Beginning with 1809, Microsoft said it would support each fall's Windows 10 Enterprise and Windows 10 Education feature upgrade for 30 months, not 18. (Enterprise's/Education's spring upgrade, and all those for all other editions, would continue to receive the now-standard 18 months.)

But Microsoft would keep spitting out two feature upgrades annually, one in March-April, the other in September-October.

"This [change] maintains the semi-annual update cadence as our north star and retains the option for customers that want to update twice a year," Jared Spataro, lead marketing executive for Office and Windows, said in a 6 September announcement.

Outside industry analysts said that that is unlikely. "I think enterprises will fall into an annual cadence," said Gartner's Stephen Kleynhans.

The reason: Microsoft's business customers had long pressed the vendor to change what they saw as a frantic tempo. They would not skip the opportunity to slow down.

Organisations running Windows 10 Enterprise or Windows 10 Education could do that by leveraging the longer 30-month support span to skip one, two or with some fancy deployment footwork, even three feature upgrades. (Computerworld spelled out how IT could adopt an every-two-year cadence by ignoring three consecutive upgrades.)

With the 12-month support gap between fall and spring feature upgrades - for Enterprise and Education, anyway - would Microsoft reduce the release number to just one a year?

Susan Bradley, a computer network and security consultant, moderator of the PatchMangement.org mailing list and writer for AskWoody.com - the Windows-centric site run by Woody Leonard, a Computerworld blogger - didn't know whether Microsoft would slow the pace. But she definitely thought it should.

"The odd cadence [in which] spring gets the shorter [support] period, fall gets the longer, means, in my opinion, that they realise that enterprises will drop into a fall-only cadence model and only update at most, every two years," Bradley said.

"[But] I still think that all customers, from home users to enterprises, need this two-year support. All customers need this same acknowledgement that change management isn't easy and we need time to deal with these feature releases."

Others had more confidence in Microsoft continuing to issue two upgrades a year.

"I don't see them backing off on two a year," countered Gartner's Kleynhans. Instead, he envisions Microsoft modifying the roles of the fall and spring upgrades.

"I think the spring update may become a little more experimental," he said, seeing Microsoft soliciting feedback on what he thought would be "a little more risky" features, which could conceivably be dropped if the trial balloon didn't lift off.