Despite public assurances from Chorus that any breaches were isolated cases, investigations reveal systemic failures 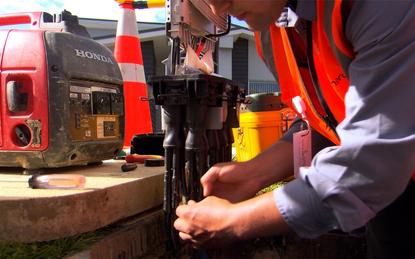 A Labour Inspectorate operation targeting Chorus subcontractors has found that nearly all of the subcontractors identified are breaching employment standards.

The Inspectorate completed 75 visits as part of a joint operation with Immigration New Zealand and Inland Revenue in June of this year.

“Despite earlier public assurances from Chorus that any breaches involving its contractors were isolated cases, the investigations and analysis to date demonstrates systemic failures in quality management.”

Chorus, which in December sought assurances from subcontractors that employment standards were being met, said today it was extremely disappointed with the findings and would take immediate action.

“We have always been clear in our expectations of our subcontractors regarding employment practices, to the extent that breaches of employment standards are also breaches of their contracts with us,” said Kate McKenzie, Chorus CEO.

“As such, we are urgently seeking relevant detail from MBIE to enable us to immediately rectify any breaches, and to urgently take all other necessary action.”

The investigations represent the first phase of inquiry into employment breaches within the data cabling industry and the inspectorate is planning further activity across New Zealand.

“We were made aware that migrant workers in the broadband industry were potentially being exploited by various subcontracting companies undertaking work on behalf of Chorus," Lumsden said.

In a number of cases contractors deliberately used practices such as ‘volunteering’ or extended trial and training periods without pay.

Approximately 900 subcontracting companies have had working agreements with Chorus and its three main sub-contractors.

"Each of these have different work practices ranging from the compliant down to the outright exploitative, so the investigations are very involved and will continue," Lumsden said.

“Many of these employees represent a vulnerable section of the New Zealand workforce that often aren’t aware of their minimum employment rights, and are concerned with their visa status.

"Large companies such as Chorus need to be proactive and ensure that their contractors and subcontractors are not exploiting their workers."

“We have known about the effect of this contracting model since they started it,” he said.

“This model of contracting and sub-contracting has allowed Chorus to pass the buck, resulting in contractors exploiting their workforce to keep to budgets and schedules.

“It has resulted in terrible outcomes for the affected workers, as well as poor delivery of services in many areas.”

In December, when incidents of mistreatment first emerged, Chorus said it had thousands of people working in the field rolling out the fibre program and the claims raised in the media were "not reflective of the wider industry".

"However, we are constantly refining our framework for working with our contractors to ensure the best outcomes that we can," Chorus network and field general manager Ed Beattie said.