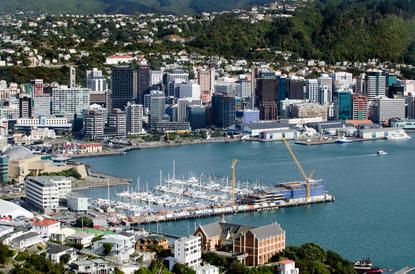 New Zealand business confidence sank to a nine-year low in the third quarter, sending the local dollar sliding as the result left the door open to a possible rate cut in coming quarters if economic growth cools sharply.

Business sentiment has been falling since the Labour-led government took the helm a year ago, prompting the central bank to highlight firms' pessimism as a key risk to growth that could lead to a further cut in the 1.75 per cent benchmark cash rate.

The New Zealand Institute of Economic Research's (NZIER) quarterly survey of business opinion (QSBO) showed a net 30 per cent of firms surveyed expected general business conditions to deteriorate compared with 20 per cent in the previous quarter.

"This survey is exactly what keeps the RBNZ (Reserve Bank of New Zealand) awake at night, and justifies the central bank's dovish tilt," said Jarrod Kerr, chief economist at Kiwibank.

The gloomy result pushed the New Zealand dollar to a two-week low of $0.6590, down from $0.6612 before the figures were released.

Signs of improvement had emerged when last week's ANZ Bank monthly confidence survey had showed a reverse in its downward trajectory, though firms remained negative about the outlook.

The RBNZ had subsequently dropped a reference to the risk posed by gloomy business confidence in its latest official cash rate decision late last month, but it reiterated it would keep policy on hold for years and was prepared to cut or raise rates depending on conditions.

The latest NZIER survey is likely to reignite central bank concerns about the firms' gloom and the potential drag on the economy at a time when international trade tensions are casting a cloud over the global growth outlook.

"It does point to a slowing in GDP growth....a fair bit of slowing," said Christina Leung, principal economist at NZIER.

The RBNZ has already downgraded its forecasts for 2019 gross domestic product (GDP) growth to 2.6 per cent from 3.1 per cent earlier.

"One of the concerning developments that we're continuing to see is that profitability continues to deteriorate...overall what this meant is that businesses are more cautious when it comes to hiring and investment," Leung added.

The NZIER had for the first time introduced a question asking larger firms what the main issues were behind their decisions.

"Businesses who thought that the general business situation was worsening were more likely to say that government policy was the major influence," Leung said.