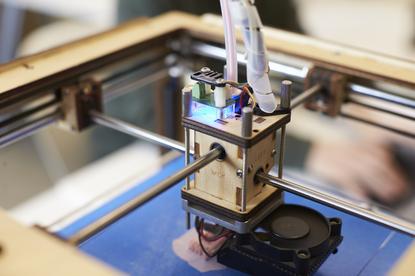 System integrators are preparing to capitalise on increased demand for 3D printing solutions, in a market forecast to reach US$23 billion by 2022.

Spanning hardware, materials, software and services, the market is expected to record annual growth of 18.4 per cent during the next five years, according to IDC findings.

“3D printing solutions are gaining traction outside of the traditional industries of aerospace and automotive manufacturing and healthcare," said Marianne Daquila, research manager at IDC.

“Professional services and retail will each see more than US$1 billion dollars in annual spending before the end of the forecast period, driven by the benefits of fully customised solutions.”

Together, Daquila said 3D printers and materials will account for “roughly two thirds” of the worldwide spending total throughout the forecast, reaching US$7.8 billion and US$8 billion respectively in 2022.

Of note to the channel. services spending will reach US$4.8 billion in 2022, led by on-demand parts services and system integration services.

Meanwhile, purchases of 3DP software will grow more slowly than the overall market with a five-year growth rate of 16.7 per cent.

According to IDC, the leading use cases for 3D printing are prototypes, aftermarket parts and parts for new products - combining to account for 45 per cent of worldwide spending in 2019.

Geographically speaking, the US will be the region with the largest spending total in 2019 (US$5.4 billion) followed by Western Europe (US$4 billion).

Together, these two regions will provide nearly two thirds of all 3D printing spending throughout the forecast.

In addition, China will be the third largest region with more than US$1.9 billion in spending, followed by Asia Pacific (excluding Japan) Central and Eastern Europe (CEE), the Middle East and Africa (MEA).