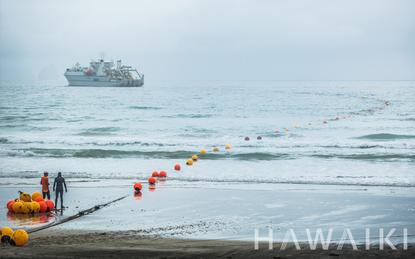 The Hawaiki Cable was landed at Mangawhai Heads, north of Auckland, in February

“This 25-year transoceanic infrastructure opens the door for unprecedented levels of economic, social and research collaboration right across the Pacific,” said Remi Galasso, CEO of Hawaiki.

"Hawaiki is the fastest and largest cross-sectional capacity link between the US and Australia and New Zealand. It will significantly enhance our connectivity to the rest of the world and, ultimately, improve the everyday life of our communities."

REANNZ CEO Nicole Fergusson, adding that the new high-speed, high-performance connectivity removes the “tyranny of distance” allowing for the easy transfer of data-intensive research anywhere in the world.

Hawaiki also provides more security to the market through new and diverse paths on both trans-Tasman and trans-Pacific links.

Vodafone CEO Russell Stanners, who leaves the company in October, congratulated the team at Hawaiki for their "immense effort and persistence" in getting to launch.

"In addition to greater levels of resiliency, the Hawaiki cable system brings greater competition to the New Zealand market, meaning we now have more choice and flexibility when it comes to designing connectivity solutions that meet the diverse needs of New Zealand consumers and businesses alike," he said.

The construction of Hawaiki, including the marine survey, design, manufacturing and cable laying, took 27 months and was undertaken by TE SubCom.

“This new 15,000 kilometre cable improves capacity, competition and resilience and sets us up for the future,” she said. “For consumers and businesses hungry for more and more data it means faster, better internet, and fewer bottlenecks, particularly when data is streamed from overseas.

“In a nutshell it’s a faster and bigger internet connection to the rest of the world, which can support bandwidth-hungry applications such as cloud services and real-time content delivery."

Galasso said he was very grateful to all of Hawaiki's partners, including customers, suppliers and financiers.

“My partners, Sir Eion Edgar, Malcolm Dick, Greg Tomlinson, and I would like to express our deep gratitude and respect to Hawaiki’s employees, whose dedication, commitment and fighting-spirit made this idea a reality," he added.