HPE places a $4B bet on its edge-network portfolio

HPE will use the funds to advance the development of "intelligent edge" products, services and engineering initiatives 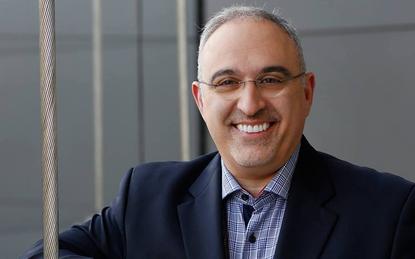 Hewlett Packard Enterprise's (HPE's) pledge to pump billions of dollars into developing edge systems shines a light on the company's ambition to be the leading end-to-end computing infrastructure provider.

CEO Antonio Neri made the investment announcement at the company's Discover conference Tuesday in Las Vegas, in his first appearance at the company's annual event as chief executive. He took over the CEO role from Meg Whitman in February.

Neri said that HPE will use the funds to advance the development of "intelligent edge" products, services and engineering initiatives.

Edge-network computing, he said, presents opportunities for enterprises as they decentralise their data capture and analytics capabilities to capitalise on the flood of information generated by IoT and mobility technology.

Neri noted that Gartner predicts that by 2022, 75 per cent of enterprise-generated data will be created at the edge.

“The edge is where most of your data is being created; we live in a time where data lives everywhere and so will your clouds,” said Neri. “We believe the enterprises of the future will be edge-centric, cloud-enabled and data driven — I believe this next revolution requires an edge-to-cloud architecture."

HPE will use the US$4 billion to advance the development of edge products, services and engineering initiatives throughout the organisation, in areas including connectivity, security, automation and AI, Neri said.

Aruba Networks will play a central role in these initiatives, Neri said. HPE acquired Aruba in 2015 for US$3 billion, to accelerate its efforts in wireless management software, integrated security, analytic tools and other technology to maximise the potential of Wi-Fi.

Edge computing is the next big opportunity

HPE's investment comes at a time when IT providers as well as enterprises see growth opportunity in edge technology. "The edge is the next big opportunity for all of use," Neri said.

"We can’t process data fast enough by moving it across the internet," he said, noting that that applies particularly to autonomous automotive systems that need to recognise objects in split seconds.

HPE already has a loyal following among data center managers, and competes with Dell EMC for the top spot in the enterprise server market.

In the first quarter of the year, HPE generated $3.3 billion in server sales, capturing 19.9 per cent of the revenue generated in the market, coming in a close second to Dell EMC, which had $3.6 billion in sales and 21.5 per cent revenue market share, according to IDC. HPE shipped 400,958 servers in the quarter to Dell EMC's 555,792, IDC said.

HPE expands from a strong base in the data centre

That strength in the enterprise server market, as well as its broad storage portfolio, puts HPE top of mind to volume technology buyers in enterprises as the company moves beyond the data center to the hybrid cloud, edge networks and the mobile world.

HPE's ambitions to be an end-to-end computing-infrastructure provider can be seen in its move to add Microsoft Azure and Amazon Web Services capabilities to its GreenLake pay-per-use offerings, providing a turnkey, managed service to deploy public and on-premises clouds. The announcement about the expansion of the GreenLake service was made a few hours before Neri took to the Discover stage.

In addition, HPE has been working to add automation and intelligence to its systems for a while. For example, last November the company said it was adding an AI-based recommendation engine to the InfoSight predictive analytics platform for flash storage, taking another step toward what it calls the autonomous data center, where systems modify themselves to run more efficiently.

In his keynote, Neri said InfoSight will be brought across the company's complete product portfolio.

HPE already has a lead in converged systems for the edge network. Last year at Discover it announced its EdgeLine Services Platform (ESP), a software foundation layer on which the company and its partners can build and plug in apps to manage data from a variety of different sources. The software runs on the company's converged EdgeLine devices.

By adding analytics to edge devices, companies can get insights to improve customer experiences as well as their own bottom line, Neri said.

Edge computing, particularly in the Internet of Things, is used to help construct smart buildings and cities, more efficient factory floors and retail experiences, and it's a big opportunity for vendors like IBM, Cisco, GE and HPE.

Leadership in IoT is up for grabs

There is growing competition among the players to stake claims in IoT.

"There are no dominant players and as far as Gartner is concerned this is the top of the hype cycle," Havart-Simkin said, in an interview before Neri made the investment announcement. There are more than 1,800 companies that claim to be involved in IoT-related technology, Havart-Simkin said, and a shakeout is coming.

HPE's investment puts it in a position to not only survive the shakeout, but snap up smaller companies with innovative edge-related technology.