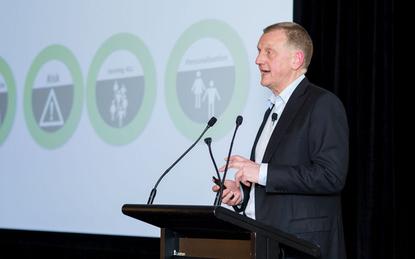 The CEO of the government's lead ICT agency, the Department Internal Affairs, has resigned and will leave at the end of September.

Colin MacDonald, who also carries the title of Government chief digital officer (GCDO), will be replaced by Paul James, the State Services Commission announced as part of a raft of executive changes yesterday.

MacDonald most recently announced an urgent review of the use of algorithms in government to ensure transparency and accountability in automated decision making.

The work was being led by Government chief data steward and StatsNZ CEO Liz MacPherson and MacDonald as GCDO.

The State Services Commission announcement did not say whether James would also pick up the GCDO role or whether that would now be separated from the CEO's duties.

The Public Service Association was among several to criticise yesterday's appointments, noting that while three positions are yet to be advertised, all five leadership roles announced went to men, reducing the number of female CEOs leading public service organisations.

MacDonald joined DIA as CEO in 2012, also taking the role of Government CIO overseeing massive changes in the way departments and agencies use and buy ICT.

A series of all of government procurement panels that have reshaped relationships between government users, and technology developers, resellers and vendors, were also established under his watch.

Before joining DIA, MacDonald was CEO of Land Information NZ (LINZ) where he led the cross-government programme for data and information re-use and established LINZ as the leader of the geospatial sector.

MacDonald has more than 30 years experience in information technology and general management in New Zealand and the UK, and was previously deputy commissioner business development and systems at Inland Revenue and chief operating officer for ANZ Bank in the Kiwi market.

James, who is currently chief executive of the Ministry for Culture and Heritage, will start at DIA on 1 October.