After three years of development, Fusion5 is lifting the lid on its new Jemini HR software 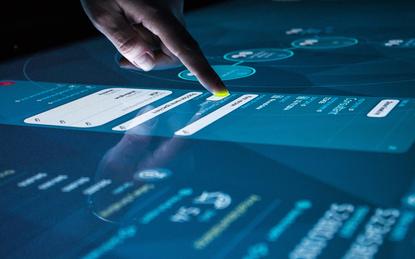 Fusion5, best known as a reseller of Netsuite and Oracle, has unveiled what it hopes will be the next generation of corporate HR software.

An in-house development team has been working on new approaches to business software, using new technologies such as touch screens and focusing on usability across all kinds of devices.

The result is Jemini, which was released from stealth yesterday.

Many payroll and human resource solutions were defined by thinking from the 70s and 80s, Chris Radley, executive director of Fusion 5, said while demonstrating the software to Reseller News last month. That means they are based on batch processing and forms.

Radley said the software is a complete end-to-end HR system that both changes the payroll process and the HR value proposition, chiefly through managing the whole person and the corporate talent base while providing high levels of insight and analysis.

"User research plays a large role within the design and development of Jemini," he said. "We use it to validate assumptions, seek out problems and develop a better understanding of how and where our users work in order to design better solutions."

A website for the software and an early adopter program are also now live, describing Jemini as "an unconventional approach to people management" - it certainly is to anyone familiar with tab and menu driven traditional HR packages.

As well as enabling extensive use of touch screens and mobility, Jemini is social, offers community support, bite-sized training and does not rely on forms, while intelligent dashboards and metric bars provide information for decision makers without the need to run lengthy reports.

Jemini is squarely aimed at meeting the expectations and needs of the next generation of users as well as business demand for improvement and efficiency, Radley said.

Fusion5 already has a significant beachhead in HR and payroll across Australia and New Zealand (A/NZ) as well as in the Pacific Islands.

Specifically, 320 customers already use human capital management software provided by the company including EmpowerHR, Jade Star, both bought from Jade, and also MyWorkplace.

In fact, the Jemini name is derived from that history, with the development project dubbed "JadeStar Empower massively improved new interface".

The development environment has also been updated, in line with Fusion 5's recently acquired Microsoft partner status, from Jade and OpenRoad to the Microsoft toolkit.

While traditional HR and payroll software offers levels of configurability, changing such applications can be hard and risky. Many, for instance, are still served in-house rather than from the cloud.

As a result, many customers have been using their current technology for up to 25 years.

Fusion5's customer research found users were satisfied with the reliability of core payroll, but have high expectations of integrated human resource systems. Customers are also are looking to improve processes across their HR and payroll functions.

Users work in predominantly paper-based organisations and not all employees have access to self service. CEOs are concerned that key system knowledge holders pose a significant risk were they to leave the organisation.

The research showed users expect more from current reporting tools and are frustrated by inefficient management of incoming queries.

Jemini is designed to answer those modern demand and to give both new and existing customers an upgrade path, Radley said.

Fusion5 is privately owned and employs 400 staff. Radley said the company has grown both organically and by acquisition and recently hit $80 million in sales.