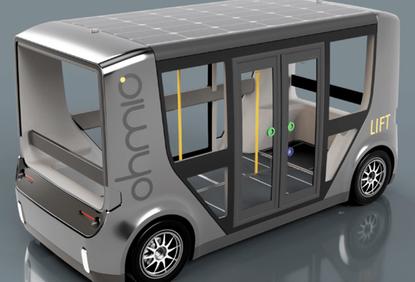 However, the agreement is dependent on SolaSeaDo securing a deal to build a large scale smart city in Korea. SolaSeaDo is in the advanced stages of securing that contract and will know later this year if it has been successful.

“This is a significant development for Ohmio and a major vote of confidence in what we have developed," Hikmet said.

The Ohmio LIFT is a 20-person autonomous shuttle that can be extended to carry up to 40-passengers (the Ohmio LIFT XT1) and operates on pre-determined routes without a driver. The offering will provide services similar to a tram, but with "virtual rails" and guided by a range of electronic systems.

Dean Zabrieszach, CEO of HMI Technologies, said he was not aware of any other commitment to deploy as many vehicles.

"We think this is the largest single deployment of autonomous shuttles in the world,” he said, adding that SolaSeado was "very confident" about that outcome of the smart city negotiations.

Ohmio has been developed by HMI in Pakuranga, Auckland, launching the first demonstration in Christchurch last September, using prototype vehicles to showcase the automated shuttles and the robotic technologies underpinning them.

“These first vehicles were to show we had developed the know-how to build an autonomous vehicle," Hikmet said.

"Since then we have been developing the Ohmio LIFT, a vehicle that we expect will be used in a range of environments such as airports, business parks and central city areas."

Ohmio's first sale was to Christchurch International Airport in March.

Having recently met with potential investors and customers in Asia and North America, Hikmet said there was a lot of international interest in Ohmio.