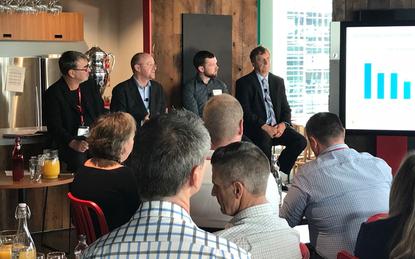 Microsoft and IDC representatives were joined by Auckland Transport CIO Roger Jones on a round table discussing digital transformation earlier this month.

Enterprises now have an array of services options to work cheaper, smarter and better in the cause of transformation -- and the benefits could be huge.

Speaking at a digital transformation roundtable this month, Auckland Transport chief information officer Roger Jones pronounced the era of big IT over as enterprise customers pursue transformation through services and break down legacy software platforms.

"There won't be the big projects, the big SAP and IBM projects of the past with single products. They're gone," he told an audience in Microsoft's Auckland office.

"In our organisation we are busy shifting to a service-based approach so you are just consuming services from wherever and cobbling that together. We see the whole technology landscape changing -- you won't buy a solution, you'll buy a whole package of services that you workflow together to get an outcome.

"The big solutions are dead. We are actively breaking those big systems down, saying we can do it through services, the IoT, cheaper faster startups are coming.

"Years ago the real-time systems were big and expensive now all of those algorithms are available on the internet for next to nothing," he said.

Specifically, the report forecasts that by 2021, 55 per cent of New Zealand's GDP will be contributed by digital technology, up from just six per cent now. That will add $9.6 billion to the economy, IDC says.

Digital transformation is estimated to add an additional US$7 billion to New Zealand’s GDP by 2021 and increase the annual growth rate by 0.7 per cent.

According to Sheers, it's now an accepted viewpoint that soon every organisation will become a digital organisation.

Transformation, as outlined by Sheers, is a process of shifting the organisation from a legacy approach to new ways of working and thinking using digital, social, mobile and emerging technologies.

"Digital transformation is about reimagining how you bring together people, data and processes to create value for your customers and stakeholders while maintaining a competitive edge in this digital first world," he added.

According to Shane Minogue, senior research manager at IDC, today's thinking about the benefits of digitisation barely scratches the surface.

"Today when we look at organisations, digital transformation is being used for productivity improvements and efficiencies in lowering cost, but it’s not really changing the strategy of companies," he said.

"They might be using 3D printing for aeroplane parts, AI and cognitive for planes taking off and landing, you may see them using AI for fuel efficiencies, data analytics for price optimisation and even drones for security. On the face of it, little has changed, but in the background, a huge transformation has taken place."

The research suggests that while 95 per cent of Kiwi organisations are aware that digital transformation is important, just seven per cent could be classified as leaders.

Minogue said the number one transformation challenge was a lack of skills and resources. Number two was siloed and resistant cultures that demanded "bottom up change".

"Organisations needed to develop a vision for what digital transformation meant for their organisations," he said. "They won’t transform in one giant leap."

Specifically, these focused on how to engage customers in new ways digitally; how to empower employees with data to create new kinds of services and offerings; how to optimise operations, and how to fundamentally transform products, taking a lead from "born in cloud" competitors such as Uber and Airbnb.

Craig said these new technologies would only speed up workplace changes we are already familiar with as technology has eliminated jobs such as typists and photocopying departments with entirely new roles such as social media marketers.

New Zealand respondents to the iDC survey felt that 89 per cent of jobs will be transformed in the next three years due to digital transformation, and 65 per cent of job incumbents today would be redeployed to higher value roles or re-skilled.

The IDC survey was conducted with 1,560 business decision makers in organisations with more than 250 staff across 15 economies in the Asia-Pacific region, including 100 respondents in New Zealand.