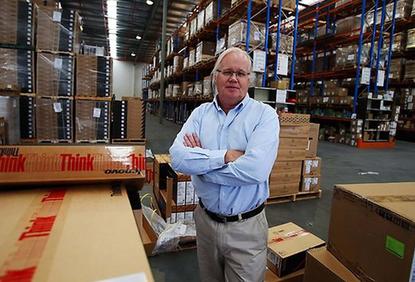 Dicker Data (ASX:DDR) pulled in just over $1.3 billion in revenue during the full-year ending December 2017, a 10.2 per cent increase compared to its tally the year prior, according to the distributor’s preliminary full-year financials, released on 28 February.

Despite a decrease in gross profit margin from 9.3 per cent to nine per cent during the period, largely a result of product mix and market competition, the distributor reported gross profit for the period of $117.8 million, a year-on-year increase of 7.4 per cent.

The company’s net profit after tax (NPAT) for the year, meanwhile, increased to $26.9 million, up by 5.1 per cent on the previous year.

The latest financials come as Dicker Data celebrates its 40th yea in operation, and its seventh since listing publicly on the Australian Securities Exchange (ASX) in early 2011.

The past year saw Dicker Data part way with Cisco in New Zealand, with the company telling shareholders in August 2017 it was expecting to see flat revenue growth in its New Zealand business during the second half of the year.

According to the latest financials, Dicker Data’s New Zealand revenue growth did turn out to be flatter than that in the Australian market, with the company reporting approximately $3.8 million in revenue growth, to $131.6 million, equating to around three per cent.

However, the distributor also added a total of 18 new vendors in 2017, contributing an incremental $87 million to the company’s figures. Of the existing vendors, meanwhile, Dicker Data saw growth of $33.8 million.

The new vendor signings in 2017 saw the company’s salary-related expenses go up, leading to increased operations costs during the year.

Operating costs for the year were $71.4 million, a 7.8 per cent increase of $5.1 million. With the increase in costs attributed to an increase in salary related expenses, Dicker Data’s salary costs saw a $5.4 million increase, to $59 million.

On a sector level, the company saw growth across all of its business units, with hardware seeing a seven per cent increase, or $71 million, software $49 million, or 22 per cent, services up by $1 million, or 15 per cent, and storage up by 23 per cent, or $3 million.

“In July 1978 I went to the USA and bought 4 of the then new microcomputers from a company called Vector Graphic," Dicker Data chairman and CEO, David Dicker, told shareholders. "We could see that these machines had a bright future. Our initial aim was to sell 10 of them a month. We have certainly come a long way.

“As I said in last year’s report, and all the ones before, this year has been a record year for sales and profit. And a record increase in the share price and market capitalisation.

“All very, very satisfying outcomes that are entirely the result of the superb efforts of all the people in the company."