Promapp shifts from regional hosting by Umbrellar to standardise on AWS globally. 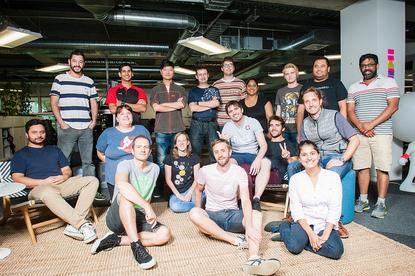 The Promapp tech team. VP of technology Gareth Maria seated on the floor at left.

"We've traditionally been mainly focused in New Zealand and Australia, but in the last couple of years we've been trying to extend it to the US," Promapp vice president of technology Gareth Maria said.

"With that comes a whole host of challenges. The size of the companies we are dealing with, their security and compliance requirements, and the potential for fairly explosive growth outstripping infrastructure."

After a period of research, AWS was chosen to enable scaling and for the compliance and security controls it has in place.

"That helped us to tick a lot of the boxes as far as the questions we get asked from potential customers about what we do and what controls we have in place," Maria said. "A lot of the tricky stuff under the hood AWS does really well."

Promapp's previous hosting infrastructure used outsourced data centres in the US and Canada, forcing it to navigate disparate back-end controls in each of area.

The Australian datacentre was hosted inside another provider's infrastructure while in Canada Promapp was using IBM facilities and Rackspace in US.

Now the SaaS provider can operate in different regions with exactly the same infrastructure. That allowed the migration to be codified into scripts, verified and reviewed by AWS.

From there it could be copied and pasted into a test environment and again into production and other regions.

"It allowed us to do a less risky migration, piece by piece, and apply changes across all regions," Maria said.

Promapp is using EC2 instances for compute, auto-scanning to scale load in different regions, some services for caching and routing, EBS for storage and S3 for back-up.

Granular controls for security allow the team to lock down functions such as domain registration and infrastructure management.

"We've pretty much gone all-in on Amazon. all of our production infrastructure runs on that," Maria added.

Infrastructure is also split across availability zones within geographies for regional redundancy. Maria said Promapp uses SQL as its back-end and a shift to Microsoft's Azure was considered.

"It's great for Microsoft workloads but then you are kind of tied into that as well," he said. "We didn't want to be tied in that tightly. AWS gives us that flexibility and has a much greater offering. That's why we went with them."

Maria said Promapp is increasing revenue by 40 per cent a year.

The privately-owned company was ranked fourth in the TIN Top Ten Hot Emerging Companies for 2017 at the Technology Investment Network’s awards ceremony this year based on the highest dollar value increase in revenue in the past year.

The tipping point is coming for Promapp, Maria said, with the business now known and taken seriously in the US with 60 clients and is winning some big deals.

"We need to be able to service these bigger clients," Maria added.