Government CTO and digital bill of rights among Curran's priorities

Clare Curran, Minister of Communications, Broadcasting and Digital Media, has outlined prioriities for her first 100 days. 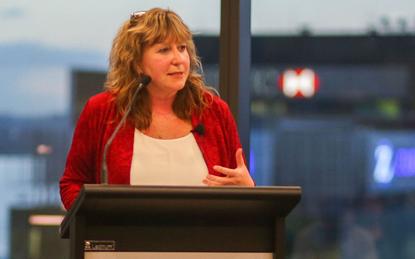 Speaking to Nethui, in Auckland, over the weekend, Curran said laying the groundwork for establishing a CTO for New Zealand led her priority list for the first 100 days.

A CTO will have responsibility for preparing and overseeing a national digital architecture or roadmap for the next five to 10 years including fibre optic capabilities, 5G and beyond in mobile technologies, artificial intelligence, robotics, autonomous vehicles, digital fabrication, AR/VR and the internet of things.

"I have already sought advice on how that position can be created, its reporting functions and key objectives," she said.

Curran also said the government would begin work on a blueprint for digital inclusion to address the emerging digital divide, establish Radio New Zealand as the centrepiece of a full non-commercial public media service, institute a process for the proactive release of government information and create a framework for strengthening citizens’ rights in the digital environment.

“This Government will be modern, future-focused and innovative. We will also work collaboratively with industry, non-government organisations and communities,” Curran said.

“This Government intends to progress its goals to close the digital divide by 2020, and to make ICT the second largest contributor to GDP by 2025.

“New Zealanders rightly expect that their government should behave in a predictable, open and transparent way and ensure that nobody is left behind. The internet and digital tools are fundamental to us achieving these goals."

In addition, Curran said there had been a lack of preparation for the future of work and the digital economy.

"Old fashioned government procurement processes have put unnecessary barriers in the way of local innovators trying to build scale and get a break," she said.

Curran said the hallmarks of her approach would be:

The National Government seemed to think the internet was all about infrastructure, she said.

"How are we going to develop the skill sets needed for the jobs of the future? How will we ensure services are as affordable and accessible as possible?

"How should national regulation evolve in an increasingly international world? What are the rights of citizens online and how will we ensure the online environment is both trusted, and trustworthy?"

"If this isn’t a bloody great red flag, then I don’t know what is!" she said. "I’d like us to be deliberately aspirational. To set bigger goals for this fast-growing sector which has so much potential for our future.

"To be deliberately strategic in how we aim to achieve those goals."

One problem is that ICT isn't tracked in official GDP figures.

"What no-one disputes is that the digital economy is growing rapidly, and even more importantly, ICT tools underpin the whole of the economy," Curran added. "If we are not using ICT effectively, the whole economy suffers.

"It’s up to industry and government, working together, to improve our deployment of technology - to increase productivity, to create new jobs and re-skill old ones, to make New Zealand more competitive against global tech multinationals in our domestic market, and to increase the number of New Zealand businesses successfully exporting both physical and virtual products off-shore."

Digital rights, she said, includes rights to protection from mass surveillance, the right to free expression, the right to privacy and rights on what is done with your personal information.