Wanted: A world where virtual assistants help (without being asked)

Only two virtual assistants – those from Google and Facebook – can eavesdrop on your conversations and chime in with helpful suggestions. We need a lot more of that, even in the office. 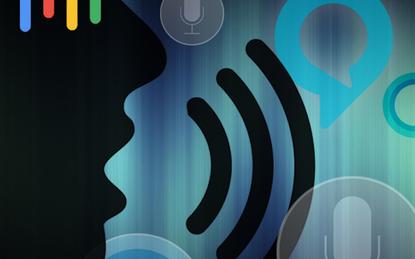 Instead of fearing that artificial intelligence (A.I.) will replace us, we should be excited about how A.I. will help us.

In a perfect future, our A.I. virtual assistant will know what we're doing, where we're going and - most importantly - what we're saying.

They'll know lots of other things, too. And when they sense we need help, they'll whisper suggestions, ideas or facts into our ears, essentially giving us real-time knowledge as we go about our day.

As you're walking from a parking garage to your meeting, your virtual assistant should give you turn-by-turn walking directions without you having to ask.

As you shake hands before the meeting, your virtual assistant should remind you (without anyone else hearing), that you met the person four years ago at a conference. During the meeting, it should listen for potential questions and supply the answer.

When it hears, "Let's meet up on this in October," it should remind you that you'll be away on business in October -- so you can suggest November.

This future is delayed by two facts. The first is that virtual assistants and A.I. aren't that good yet. And the second is that the public isn't ready to be "spied on" all day by the companies that make virtual assistants.

The good news is that progress is being made on both fronts by Google and Facebook.

Each Allo account is tied to a specific phone number, and the smartphone using that number must validate the browser version with an on-screen QR code to enable its use.

At the moment, only Android phones can validate, with Google promising an iPhone version shortly. (Go here to enable the web version.)

The browser version simply provides an interface for Allo on the phone. If your phone dies, goes offline or if you uninstall the mobile app, the browser version becomes unavailable. You can be logged into just one browser session at a time.

In some respects, Allo is an ordinary modern chat app. It offers "stickers," for example. But Allo also uses two forms of "suggestion" A.I.

Google's "Smart Reply," which uses neural nets to guess at the reply you might choose, works in both Allo and Google Inbox. Smart Reply pays attention to what's being said, and offers relevant suggestions - in this case, of course, suggestions about how to reply.

The Google Assistant, which is a virtual assistant platform, is also available via Allo. You can type commands and queries just as you would speak them to a Google Home device.

The single most interesting aspect of Google Assistant in Allo (and the new desktop browser version) is that Assistant "pays attention" to chat conversations, and occasionally suggests things. For example, if you start talking about pizza, it might suggest a nearby pizza joint.

Typed chats feel more private and formal than, say, something that listens to actual conversations and makes suggestions based on what it hears.

Most news reports and even Facebook announcements confuse "M," which is an unreleased A.I. virtual assistant experiment project, with "M Suggestions," which is a feature of Facebook Messenger that has been released in most English- and Spanish-speaking countries.

To clarify, M is more of an umbrella project for Facebook to figure out how A.I. could enhance or augment social interaction at massive scale.

If you visit the help page for M and click on the "How can I use M" link, it will probably tell you "M isn't currently available in your area. When it is, you'll be notified in the Messenger app." Only a tiny number of select users participate in the M experiment. Facebook M is not generally available in any country.

Everyone who uses Facebook Messenger in the U.S., UK, Canada, South Africa, Australia, Spain and Mexico does not automatically get access to M, but they do get access to M Suggestions.

Unlike the M experiment, M Suggestions is a "shipping" feature of Facebook Messenger, released in those countries and in two languages - English and Spanish.

M Suggestions can urge you to save Messenger conversations or remind you to wish somebody a "Happy Birthday" when it's their birthday.

The latest news is that M Suggestions also offers music suggestions via Spotify when you're talking about music.

M Suggestions "eavesdrops" on the chat (it's all text, so it's not technically "listening"). However, credible reports by Bloomberg earlier this month indicate Facebook is working on at least two Amazon Echo-like virtual assistant appliance products that would presumably run Facebook M Suggestions.

In that case, it could actually listen to conversations, then interject with spoken computer voice. (This, of course, is conjecture on top of rumour. But it's easy to imagine a Facebook home appliance you talk through, where you say: "Call Steve," to which the device answers: "OK, calling Steve. Don't forget to wish Steve a happy birthday!")

One rumoured version of a Facebook appliance has a screen, which could display suggestions quietly while you talk via audio or video.

As a social-networking company, Facebook focuses both the larger M experiment, and also M Suggestions, on greasing the wheels of social interaction. It's not about knowledge or productivity, but communication.

Amazon now makes several versions of its Echo line of virtual assistant appliances. Google's Home appliance now functions as a telephone. Apple's HomePad appliance ships in December. Facebook is rumoured to be working on at least two such appliances.

By the end of the year, virtual assistant appliances will be without question a "mainstream" product category.

First, we need business versions of these appliances that replace office telephones, an idea I detailed in May.

Second, we need "suggestions" to be part of these devices. That would mean they would listen not just for the trigger "keywords," but would listen all the time to everything, and chime in opportunistically with suggestions.

For the business appliances, these should appear silently on screen, and have access to calendar, contacts and other user data. They should also have good APIs so corporate application data could be accessed as well.

And third, "suggestion" A.I. needs to be part of our smartphone virtual assistants as well. Wireless earbuds should be the hardware interface for constant interaction with virtual assistants that, yes, offer suggestions based on our contexts and conversations.

I know, I know. Privacy. But privacy concerns shouldn't be a deal-breaker. We should demand from the creators of these "suggestion"-capable A.I. virtual assistant strong assurances of data privacy. That's both possible and necessary.

The benefits of A.I. "suggestions" will enhance everything about our lives, including our business interactions.

Google and Facebook are on the right track. We just need a lot more of it.