Mixed figures across the ditch for JB Hi-Fi

Total sales in Australia were grew by 10.9 per cent for the full year 2017 results, while New Zealand saw total sales down by 0.3 per cent 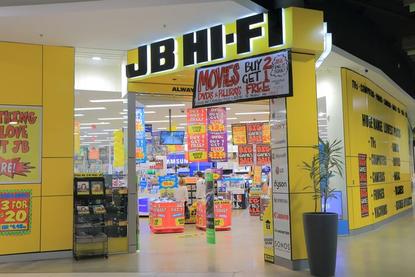 JB Hi-Fi (ASX:JBH) has seen its total sales grow by 10.9 per cent year-on-year to $4.15 billion for the Australian region for its full year 2017 financial results ending 30 June.

According to the company, key growth areas that led to this increase were communications, audio, cameras, accessories, computers, and home appliances categories, in addition to a 14.4 per cent increase in hardware and services sales.

But its software sales were down 9.1 per cent.

In a statement on the ASX, the company said that for that financial year, online sales grew 38.4 per cent from the same time last year to $158.9 million, or 3.8 per cent of total sales, reflecting “continuous improvement” across aspects of its digital assets.

However, its New Zealand business saw negative revenues. Total sales were down 0.3 per cent to NZ$234 million from the previous year.

JB Hi-Fi said this was because sales in the prior year were aided by market wide demand for third party content cards and that excluding the impact of these cards, its total sales would have been up 3.4 per cent.

Its gross profit was down 1.7 per cent from the same time last year, from NZ$43.2 million to NZ$42.5 million. Earnings before interest and tax was down from NZ$1 million in profit last year to a loss of NZ$2.7 million in 2017.

“While we are disappointed with our recent financial performance, we have completed a review of the business and are finalising a two-year strategy to improve performance,” JB Hi-Fi group CEO, Richard Murray, said.

Collectively, the company reported a net profit after tax of $207.7 million for its full year 2017 financial results, a 36.5 per cent increase from the same time last year. It attributed its growth to the $5.6 billion in sales for the full year, from the $3.95 billion it reported in 2016.

The Good Guys, which was acquired by the company in November 2016 and led by Terry Smart, saw total sales up 0.2 per cent to $1.26 billion, with online sales driving $64.4 million or 5.1 per cent of that growth. JB Hi-Fi also reported that the Good Guys’ commercial division has now joined its broader commercial business tram and will go to market as a combined group.

“The group’s combined scale provides our supply chain team with many opportunities… we are particularly encouraged by the work the teams have undertaken to date and expect to deliver a number of initiatives during the course of FY18,” it said in a statement.

JB Hi-Fi also said that it expects to achieve the upper end of its synergy target of $15 to $20 million, which it expects to realise by FY19, one year earlier than originally anticipated, with about half of the benefit to be achieved in FY18.

“The synergies will be recorded within earnings in each of the JB Hi-Fi and The Good Guys businesses in FY18 and FY19 and are broadly split equally between both businesses. The company will continue to seek efficiencies and drive further synergies,” it added.

“2017 has been a strong year for the group. We are clear on our objectives for 2018 and feel we have good momentum,” Murray mentioned.