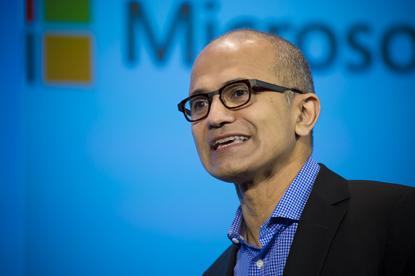 While the superlative awarded to the software giant by TBR should come as no surprise, TBR analyst, Kelsey Mason, has pointed to particularly strong performance in the vendor’s “as-a-service” revenue, which reached US$15 billion in 2Q17.

This result put the vendor well on its way to far surpass its “as-a-service” revenue run rate goal of US$20 billion by 2020, according to Mason.

At the same time, Microsoft’s growth in Office 365 and Azure premium services, the adoption of new workloads around the Internet of Things (IoT) and artificial intelligence (AI), and a growing mix of Dynamics 365 revenue drove the vendor’s momentum during the period.

“Innovation across our cloud platforms drove strong results this quarter,” Nadella told shareholders. “Customers are looking to Microsoft and our thriving partner ecosystem to accelerate their own digital transformations and to unlock new opportunity in this era of intelligent cloud and intelligent edge.”

It should be noted, however, that Microsoft’s Surface revenue decreased by two per cent, mainly due to product lifecycle transitions.

Microsoft's latest financials come as the company looks down the barrel of major organisational changes that could reportedly see thousands of jobs within the company affected.

The reorganisation, which is aimed in part to increase the company's focus on its cloud business, is expected to affect the company’s sales and marketing teams globally, and is anticipated to see somewhere between 3000 and 4000 jobs hit, according to a report by The New York Times.

"Today, we are taking steps to notify some employees that their jobs are under consideration or that their positions will be eliminated," a Microsoft spokesperson told ARN on 7 July.

"Like all companies, we evaluate our business on a regular basis. This can result in increased investment in some places and, from time-to-time, re-deployment in others," the spokesperson said.