Yes, Apple is building a car

All signs point to Apple building cars in the same way (and for the same reason) they build iPhones. 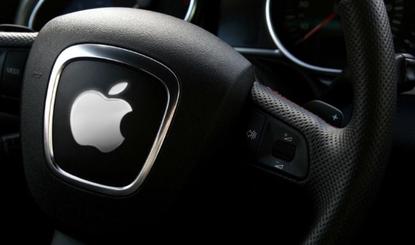 The experts say Apple's self-driving car project is cancelled, delayed or converted into a software play. They'll also tell you that cars are a weird business for Apple to be in.

The experts have it all wrong.

Apple is going pedal-to-the-metal on building a car and for good reason. Here’s why.

The late Apple founder and CEO wanted more than that, according to J. Crew CEO and chairman Mickey Drexler, who served on the Apple board from 1999 to 2015. Jobs wanted Apple to reinvent the automobile industry.

The idea of an Apple car was considered crazy talk — until word leaked about a secret Apple initiative called "Project Titan," which reportedly involved more than 1,000 engineers.

It has since emerged that Apple maintains a secret car-testing lab in Silicon Valley near Apple's headquarters, which reportedly operates under the fake company name SixtyEight Research.

But then reports emerged late last year that hundreds of "Project Titan" employees were reportedly removed from the project.

Tech and financial pundits interpreted this events in various ways. Some said the car project was essentially canceled. Others said Apple is moving forward with cars, but is too far behind to catch up.

Most experts say that "Project Titan" has become a software play — that Apple will simply design an operating system for cars, but not the cars themselves.

These conclusions are almost certainly wrong.

In order to keep growing, however, Apple needs to enter and conquer gigantic new markets.

Apple's next industry has to be much bigger even than today's smartphone market, which in 2016 was a roughly $430 billion industry.

But which market? What's even bigger than smartphones?

Morgan Stanley analyst Katy Huberty predicts the self-driving car industry will be worth $2.6 trillion per year by 2030. (Just for context, that's 13 years away. It was only 13 years ago when Apple started working on the iPhone.)

The evidence that Apple is interested in the auto industry expands way beyond "Project Titan."

CarPlay, Apple's in-dash infotainment system enables stuff on an iPhone to be controlled on the dashboard and played through a car's speakers.

We learned in March that Didi opened an artificial intelligence-based, self-driving car lab near Apple's headquarters in Silicon Valley.

Didi's president, Jean Liu, the daughter of Lenovo founder Liu Chuanzhi, was named one of Time's 100 Most Influential People. Apple CEO Tim Cook personally wrote the Time profile of her.

Apple's unprecedented investment in Didi, and its close relationship, suggests that Apple wants to learn all about the technology and consumer behaviour around the ride-sharing industry.

Overall, Apple is investing heavily in cars. One analyst estimates that Apple has invested $5 billion on automotive research since 2013.

Why a car fits Apple's mission, but a car OS does not

Since the launch of the iPod in 2001, Apple's obsession has been to transform the user experience for content consumption and communication on mobile devices. The company has done this by controlling hardware, software and services for the iPhone, iPad and laptops.

In the past, cars were primarily about driving and secondarily about content consumption. With autonomous cars, that prioritization will be reversed. Fully automatic cars will be battery-powered living rooms on wheels.

As Apple Chief Operating Officer Jeff Williams said in 2015, "the car is the ultimate mobile device."

Without the need to pay attention to driving, there will be nothing to do in a car except listen to music, watch TV and movies, enjoy VR experiences, read and chit-chat with friends over video calls.

All this is Apple's wheelhouse, and with self-driving cars, it's literally a wheelhouse.

As with phones, Apple will tap into a significant slice of the automotive pie and make cars a high-margin business by designing and selling the hardware and software, selling a wide range of services, and taking a massive cut on content.

What the experts are missing

Experts are speculating that Apple has either cancelled its plans to build cars, is going forward but is dangerously far behind, or has settled on a software-only strategy for cars.

Apple is incredibly secretive about unannounced products and initiatives and hasn't announced anything about cars. Still, tantalizing clues to an Apple car emerge.

Apple appeared last month on the California Department of Motor Vehicles' (DMV) list of companies granted self-driving car drivers' licenses. Apple is now legally allowed to test three 2015 Lexus RX crossovers. And a couple of weeks ago, an Apple test vehicle was spotted driving on the streets of Silicon Valley.

A Swiss IT publication reported last month that Apple hired at least 10 doctoral or postdoctoral students from the Swiss Federal Institute of Technology in Zurich, all in the areas of visual navigation, computer vision and robotics. The new hires are working in Apple's Swiss research facility.

Another hint came from Apple's annual 2017 Supplier Responsibility report, in which it listed among its suppliers Robert Bosch GmbH, the German automotive components giant. Apple is buying car components.

Of course, none of these facts prove that Apple is on track to build a Tesla-killing autonomous iCar.

But here's what many experts have failed to consider.

The "Project Titan" reorg has been interpreted by the press as a pivot toward Apple making the underlying software for self-driving cars, but not the cars themselves. The assumption is that Apple would embrace the same model Microsoft used for PCs — make the software, but let others make the hardware.

But the evidence suggests that Apple will instead embrace the Apple model, which is to make the hardware, software and services that are "consumed" on a hardware device produced for Apple by a third-party contract manufacturer.

One Bloomberg source claims that around a dozen engineers from a company called Magna Steyr are working the "SixtyEight Research" car lab.

In fact, all evidence suggests that Apple is not building the capacity to build cars, but instead cultivating the ability to partner with Magna Steyr to build them. (The Berlin lab, the Swiss poaching, the Robert Bosch supplies all support the idea that Apple will be manufacturing with German engineering and German-speaking expertise.)

Apple revealed this month that its cash hoard now exceeds $256 billion. If Apple wanted the most advanced self-driving tech in the industry, it need only buy whomever's got it.

In other words, technological leadership is a non-issue for Apple. That's something money can buy, and Apple has more money than anyone.

If you were given a look at Apple's secretive smartphone project on Jan. 9, 2006, you would have concluded that the company was too late to market, was way behind the industry leaders and would have no chance of leading the industry. One year later, however, Apple announced the iPhone, and the company came to dominate the industry.

Apple's history with the iPhone suggests the company won't want to be the first to market (the iPhone shipped 15 years after the first smartphone, which was the IBM Simon).

Apple should not want to enter the autonomous car market until the company thoroughly understands what's wrong with the self-driving car experience — and how to fix it.

4. The transportation experience of the future idea

When we think about cars, we think about today's car industry. Big car companies design, build and sell heavily branded "driving machines," which customers buy based on brand loyalty, status, self-expression or utility.

The autonomous car world will change everything. In the future, the car stuff (engines, tires, paint jobs) will be less relevant to consumers, who in any case may avoid actually buying a car. The reasons for buying or not buying a car will have little to do with status and everything to do with the experience of transport.

The biggest and most breathtaking vision for the Apple car is this: Transportation is just a service provided by Siri.

You tell Siri that you'd like to go to work now. Siri tells you that an iCar will be there in two minutes. (Or you schedule a daily pickup.)

You go outside, get in and sit on the couch inside the car. Your iCloud and iTunes accounts automatically take over the car's entertainment system. It's like you're inside your iPhone. You use voice to play music, watch video, call people and so on.

The ride is billed to your iTunes account, or is paid for by your monthly subscription. No need to own a car.

The conveyance of your body becomes an Apple-controlled experience. Phone conversations or content like music moves seamlessly from your home speakers to your AirPods, to the iCar, back to your AirPods and then to the Siri appliance on your desk in your office.

This is the ultimate way for Apple to control your content consumption and communication experience all day, every day.

A car will become for Apple what the company's data servers are — Apple-owned hardware that provides services to users.

Apple got into the phone business because that's where people would consume content and communicate, and also because it's a massive industry they could dominate with hardware, software and services. And they'll get into the car business for the same reason.

This article originally appeared on Computerworld.com.