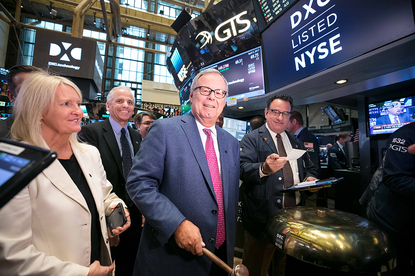 The official launch and public listing of DXC Technology, the IT services entity resulting from the spin-merger of Hewlett Packard Enterprise’s (HPE) Enterprise Services business and Computer Sciences Corporation (CSC), comes after a lengthy lead up.

The proposed merger of the two companies, valued at around $US8.5 billion, was announced on 24 May 2016, with HPE flagging the spin-off its Enterprise Services business to free it up to join forces with CSC.

Billed as a “pure-play, global IT services powerhouse,” the new company is expected to see $US26 billion in annual revenues, and claim nearly 6,000 clients in over 70 countries - around half of which are based in the local market, with Australia and New Zealand claiming more than 3,000 DXC Technology partners, many from the company's UXC heritage.

HPE officially spun-off its Enterprise Services division on 3 April (US time), suggesting that the spin-merge of its ES business “unlocks a stronger, more focused HPE, well positioned to compete and win in today’s rapidly changing market”.

“As planned, HPE will now execute a clear and ambitious strategy based on three key pillars: First, making hybrid IT simple through secure, software-defined offerings that enable customers to move data seamlessly across their traditional data centers, private and public cloud environments,” the company said.

Meanwhile, the new entity, DXC Technology, is setting its sights on flexing its newfound talent-base and extensive resources to engage with its combined roster of partners and clients locally and around the world.

“Together with our partners, we help clients harness the power of innovation to create new business outcomes,” Lawrie said. “Our technology independence, extensive partner network, and world-class talent are core differentiators.

“We begin the new chapter in our journey knowing that collectively we have met the challenges of innovation many times before, and with a clear and confident vision for navigating the future,” he said.

“[DXC is globally the largest independent IT services firm,” Seelan said at a launch event in Sydney on 4 April. “It has 170,000 people, $25 billion in revenue, and 6,000 clients globally.

“For this marketplace in A/NZ, it’s unique, we’re actually the number one provider in this market.

“Our partner ecosystem plays a critical part. We work with our partners to co-create solutions and the outcomes our partners are looking for,” he said.

The company’s launch in the local market has given rise to hopes of new openings for IT professionals in the local marketplace, with New South Wales (NSW) parliamentary secretary for finance, services and property, Alister Henskens, who spoke at the launch event, suggesting that the move will lead to new jobs in the region.


“From a local perspective,with about 6000 employees in NSW alone, DXC will be a significant employer and corporation in this state, and you won’t be surprised to know that our government appreciates people who provide local jobs especially in the important commercial areas involved here,” Henskens, said.

Henskens also highlighted the market clout the entities comprising the new company have had with the state government, outlined the long history of government work the companies have undertaken with state government agencies and departments.

“The two companies that are coming together have previously worked with the NSW Government. They’ve worked closely with Service for NSW, been involved in providing services such as the network and infrastructure for the service desks at Service for NSW,” Henskens said.

“Also, the companies that are coming together have also provided…network support for Transport for NSW and asset management at Sydney Trains – significant government enterprises,” he said.

The prospects of DXC technology’s creation to result in a surge of new local IT jobs was foreshadowed in February, when the pre-merger CSC announced it had inked a landmark deal with the South Australian Government that would see it create up to 400 additional jobs in the state.

The multi-year deal sees CSC – now DXC technology – provide and support desktop PCs, laptops and tablets to the state’s government agencies, with much of the South Australian Government’s IT hardware footprint set to be handled by the IT services provider.

The contract win will see the company establish a new office in the state’s capital, Adelaide.

“The state will no longer own and manage physical devices, giving agencies more flexibility and access to innovative ICT solutions to help modernise the services they deliver to the community,” a statement issued on 16 February by the office of South Australian Premier, Jay Weatherill, said.

“This more efficient, end-to-end approach will reduce costs as government will only pay for the services it consumes. Once implemented, the new arrangement is expected to deliver savings of over $11 million per year,” it said.

Given the heritage in the local market of its various businesses, government makes up a fair proportion of the new company's work in Australia and New Zealand. However, it also plays in the healthcare, insurance, diversified, banking and capital markets.

For Nayagam, the launch represents a "new beginning" for its local clients, partners and employees.

“We have been presented with a unique opportunity to launch a new company and brand based on the combined experience and talent of two IT services leaders," Nayagam said.

As DXC Technology, we will harness the best skills and latest technologies to help our clients transform their businesses and thrive on change,” he said.