Tech giant introduced a flashy new red iPhone 7, a storage boost for the iPhone SE and a cheaper iPad price. 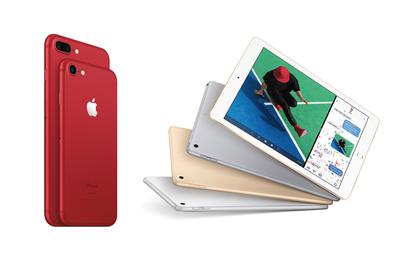 Apple just made upgrading to an iPhone 7 a philanthropic decision by adding a red special edition to the line-up.

The new red aluminum finish, which is available to order for both iPhone 7 and 7 Plus in-store and online on March 24, is a fundraising effort for the Global Fund.

Apple will contribute a portion of red iPhone sales to the fight against AIDS and HIV.

The two new red iPhones will come in 128GB and 256GB storage variations and start at US$749 in the U.S. Apple will sell the special editions in more than 40 countries by the end of March, with Brazil, Chile, Colombia, India, and Turkey to come in April.

If you live in the U.S., U.K., or China and are part of the iPhone Upgrade Program, you’ll be able to snag an unlocked red iPhone with AppleCare+. In the U.S., the 128GB iPhone 7 will start at US$37 a month with the ability to upgrade every year.

Apple has a long-standing relationship with the Global Fund and has a variety of products in its red line-up, including iPods, cases, headphones, and speakers.

Last December, Apple celebrated its decade-long partnership with the Global Fund by donating proceeds from in-app purchases, exclusive downloads, and newly launched accessories to the nonprofit.

The company has so far donated more than US$130 million to the Global Fund, making it the organisations’s largest corporate donor.

iPhone SE gets a bump, too

Apple hasn’t forgotten about the littlest phone in its line-up, the iPhone SE - the company just doubled the 4-inch phone’s storage to 32GB and 128GB, up from 16GB and 64GB.

Those models will be phased out and the roomier new options will start at US$399 beginning March 24.

While the flashy new colour and iPhone SE upgrade aren’t the biggest iPhone news of the year—that will come in September with the 10th anniversary iPhone 8—it’s nice to see Apple add a little something extra to both its existing flagship and its entry-level phones.

While we’re still waiting for a fresh iPad with barely-there bezels to make an appearance, Apple has returned to its roots with a new 9.7-inch model simply called iPad.

And if you had previously balked at buying an iPad Air 2 because the price was too high, you might want to take notice.

Apple hasn’t technically added a new model to the iPad line-up, but it has bolstered the low end. Gone is the aging iPad Air 2 (as well as the whole Air branding), and in its place is a new model that looks exactly the same, with a 9.7-inch retina screen, Touch ID, 32GB or 128GB of storage, and the same colour choices (silver, gold, and space gray).

On the inside you’ll get an A9 chip—the same one that’s in the iPhone 6s—and the usual 10-hour battery. That’s a relatively small upgrade over the 8X chip that was in the iPad Air 2, but the difference here isn’t in performance, it’s in price.

Apple has slashed the cost of the entry-level iPad from US$399 to US$329, the same price it once charged for the iPad mini.

For US$100 more, you can quadruple the storage to 128GB, and as always, cellular capability costs US$130 more.

Obviously, the new iPad doesn’t have any of the Pro’s features, like the Smart Connector or Apple Pencil support, but it’s definitely an attractive entry-level model.

As far as the iPad mini, the fourth generation of Apple’s 7.9-inch tablet is still hanging around, but it’s the only model that doesn’t start at 32GB of storage. The mini now comes with just one storage option, 128GB, for the same price of US$399.

That makes it slightly cheaper than a similarly spec’d iPad, but Apple is clearly pushing the larger tablet here, continuing a trend that started with the iPad Pro.

The mini is still running the two-year-old A8 chip, and all signs appear to point to a phase-out of the smaller tablet within the next year or so.

That’s still a lot of options, but it’s much easier to digest than the previous lineup, and puts a clear delineation between the upper and lower models without sacrificing too much in the way of performance.

The new iPad will go on sale Friday, March 24 in the U.S. and more the 20 countries.

You don’t have to buy the special-edition Nike+ version of the Apple Watch Series 2 to get your hands on that breathable perforated Sport band.

Apple just refreshed its accessory line-up for spring, and the US$49 Nike option is a highlight for athletes.

In addition to the Nike Sport band, which comes in three colours, Apple also introduced three new colours for its regular US$49 Sport bands, a new US$49 wide-stripe nylon band in six colours, and three colours for the $149 leather classic buckle option complete with new buckle design.

If you’re feeling fancy, Apple’s leather band collection with Hermès now includes some stunning new colours for a price: a US$339 42mm single tour leather band in “lime epsom” and “colvert swift” (chartreuse and teal, basically); a US$489 38mm double tour leather band in “bleu zéphyr epsom” (a robin’s egg blue); and a US$689 38mm leather double buckle cuff in “fauve barenia” (I had to Google this, but it’s a classic English saddle shade).

If you buy the Apple Watch Series 2 with the double buckle cuff (which starts at US$1149), you’ll also get an exclusive orange Hermès Sport band for free.

Apple is all about colour this season, with a bright red iPhone 7 joining the line-up today, too. If a brand new phone is out of your budget, a new case is significantly cheaper.

This article originally appeared on Macworld.com