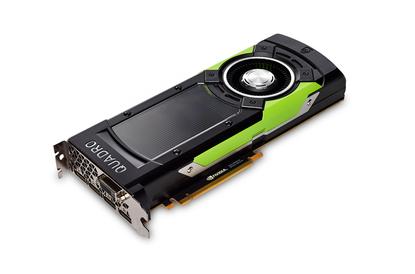 Nvidia's Quadro GP100 shares many features with the company's most advanced Tesla P100 GPU, but it also brings the superfast NVLink to Windows PCs and workstations.

The Quadro GP100 isn't targeted at gaming -- it's aimed more at virtual reality content creation, simulation, and engineering applications. The GPU is based on the Pascal architecture and is capable of supporting up to 5K displays at 60Hz.

The new GPU is the fastest Quadro yet, with 32-bit floating point performance of about 12 teraflops via 3,584 CUDA cores. That outpaces the Quadro P6000, which delivers 10 teraflops of performance.

The Quadro GP100 has four DisplayPort 1.4 slots and one DVI slot. It will be shown for the first time at the SolidWorks World 2017 in Las Vegas, which starts on Sunday. The GPU will ship worldwide, but pricing was not immediately available.

The high performance comes thanks to the latest memory and throughput technologies. It has 16GB of HBM2, a form of 3D memory that is also in the Tesla P100. It also the latest superfast two-way NVlink interconnect, which helps get data in and out of the GPU faster.

NVLink is used as the main throughput mechanism to separately link up two GPUs in a PC, and that facilitates faster GPU communication than regular SLI configurations.

NVLink, though faster, isn't expected to replace PCI-Express 3.0 in Windows PCs anytime soon, so this is an intelligent way to use the superfast interconnect technology, said Allen Bourgoyne, product marketing manager for Quadro at Nvidia.

This is the first time NVLink is coming to Windows systems. NVLink can slot directly into the motherboards of IBM Power8 systems and is used in Nvidia's DGX-1 server, which runs on Linux.

NVLink won't need a specific driver, and it will work only on GPUs. Nvidia is abstracting the NVLink interconnect at the hardware level. Applications will, however, need to be tuned to take advantage of NVLink. Nvidia provides CUDA parallel programming tools to harness the computing power of multiple GPUs.

For content creation, the GPU will work with all major VR headsets. Though the GPU isn't designed for gaming, it can be put into a "gamer developer mode," Bourgoyne said.

"If you want to force the Quadro in the GeForce [gaming] mode, you can," Bourgoyne said.

Like the Tesla P100, it can also be used for deep learning. Learning models can be tested on the Quadro GP100 and then ported to servers.

Nvidia also introduced new Quadro GPUs including the P2000, P1000, P600, and P400, which deliver varying levels of performance. Those GPUs don't have the NVLink interconnect or HBM2 memory.