"I actually know people by their real names over at Apple," says one partner building apps for iOS devices 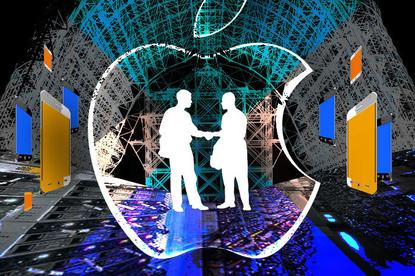 You won’t find many public references by Apple to its Mobility Partner Program, an expanding effort by the company to unite with software developers/integrators to boost sales of iPhones and iPads to businesses.

In fact, Apple reportedly has discouraged partners in years past from discussing MPP out in the open.

But the veil of secrecy surrounding the program is thinning. Apple’s public relations department didn't acknowledge my queries about MPP, such as how long the program has actually been around.

But CEO Tim Cook has begun citing the program during Apple (AAPL - NASDAQ) earnings calls over the past year: He specified in October that more than 120 partners have signed on worldwide, and that’s up from about 90 at the start of the year.

Perhaps emboldened by Cook’s revelations, Apple mobility partners are increasingly making themselves known. After all, why should Apple’s really big name partners – those like IBM, Cisco, SAP and Deloitte that it has touted over the past few years – get all the glory?

I’ve interviewed a handful of these Apple Mobility Partner Program members over the past week or so to get a sense of what it’s like formally sidling up to Apple via the MPP and what it has meant to their enterprise customers.

Technology solution provider World Wide Technology’s Asynchrony Labs revealed this January that it is a new member of the MPP, and the results are so far, so good, according to Bob Elfanbaum, GM and co-founder of the labs. Asynchrony Labs is a 425-person agile software development subsidiary of WTT, a business that pulls in $9 billion-plus in annual revenue.

Elfanbaum suggests that the MPP has perhaps begun to emerge more publicly in part because Apple’s general approach to supporting enterprises has changed, with the company moving a little away from engaging enterprises directly with its own sales organization and building up a channel partner network of solution providers and developers.

“I think historically the Mobility Partner Program was a lot more focused on product companies vs. solutions or integrated solutions companies [like ours],” he says. Asynchrony Labs focuses on integrating Apple technology into customers’ IT infrastructure and architecture, including Cisco networks, so that they can build upon those iPhone and iPad platforms. He says Asynchrony has had about a dozen people in recent months focused on research and development around Apple and Cisco products, and benefits by gaining access to alpha and beta products.

“Today, the customers are trying to figure out how to leverage APIs emerging from Cisco” related to products such as Spark, Meraki wireless gear, etc., Elfanbaum says. “So we can do things like at a large retail customer actually pulling data out of the network about what users are doing and how they’re accessing the network, and then using that data to drive customers’ experiences on the mobile application.”

Elfanbaum, who acknowledges members of his team were "early Apple fanboys" who appreciated Apple's architectural and security approaches, says the partner program goes way beyond a simple marketing deal. “The nice thing is that we interact with them heavily on the technical and engineering side, but increasingly on the go-to-market side,” he says.

Having that technical and engineering access allows Asynchrony to focus on really helping customers build apps that leverage specific mobile platforms, rather than just slapping desktop apps onto a mobile device.

While Asynchrony Labs has been working informally with Apple for years, it wasn’t easy getting into the MPP. “They are looking for commitments from us, and likewise for us, we wanted to make sure this wasn’t just a marketing thing, that it would bring real value to our collective customers,” Elfanbaum says.

ATIMI: FROM VANCOUVER TO CUPERTINO

This Vancouver-based native app development specialist, a part of Apple’s App Store since the day it opened, has carved out a separate page on its website to tout its inclusion among “a handful of global partners in the Apple Mobility Partner Program.”

“There are literally thousands of companies out there that can build you a native mobile app,” says Frank Matas, VP of sales and marketing for Atimi, which builds about 80% of its apps for both Apple and Android devices. “It’s a difficult market to differentiate yourself in today,” but being a member of the MPP helps, he says.

It’s not like there are 10 bullet points of benefits from being a part of MPP. “It’s more like one or two,” Matas says, but those one or two are important.

Matas says when Apple goes into a customer account and is asked about who can build an app for them, Atimi gets referrals. “The biggest bullet for us is that we’re trusted, that Apple vetted us,” he says.

Apple is most enthusiastic about apps that disconnect employees from their desktops and have them exploiting iPhones and iPads, Matas says. “Apple has no interest in the customer-facing apps,” he says. “Employee retention and productivity, those are the kinds of things that excite them.”

Otherwise, Apple isn’t especially proactive through the program, but being a member opens doors for Atimi when Matas or colleagues want to ask questions or make presentations. “I talk with them every couple of weeks,” he says. Matas joined Atimi last summer, after 6 years at SAP, to help get the word out about the app development outfit, which he says has built more than 100 apps over the past 10 years.

Atimi has actually brought customers down to Apple labs in Cupertino and Matas says Apple will review his company’s work as apps are being built.

“They’ll make recommendations on what we should change, on what customers might want to consider, Matas says. “We’ll build what the customer wants, but it helps to actually have Apple tell customers what it thinks.”

SHOWPAD: "OFFERING CONSUMER GRADE USABILITY WITH ENTERPRISE RIGOR ON THE BACK END"

Showpad, a Ghent, Belgium- and San Francisco-based maker of sales enablement software for iOS and other platforms, revealed itself to be an Apple Mobility Partner Program member in 2015. Showpad, which says sales people use its software an average of 15 hours a month, finds being in the program bolsters the company’s credibility with current and potential customers.

Senior Director of Business development David Warren, who joined Showpad last year, says MPP has been almost like a startup within Apple’s large organization that has been figuring itself out. For Showpad, the relationship has involved everything from co-marketing to co-development to co-selling. It’s evolved from sort of a default partnership program to something more, he says.

“Even now I believe the team is not very large by Apple’s standards, but they have a large and important charter in terms of ramping up the ecosystem around Apple,” Warren says. This includes connecting ISVs like Showpad with top Apple channel partners on the reseller side.

“I actually know people by their real names over at Apple,” he adds.

Like Matas from Atimi, Warren says that Apple is very focused on selling devices into businesses.

“What we can try to do together is meet the common challenge, which is how do you offer consumer grade usability with enterprise rigor on the back end,” Warren says. “How much time can you spend talking [to a business customer] about the recs and specs of an iPad? But you can spend a lot of time talking about Showpad on the iPad in a financial services context where you have high usability by folks on the front line, security on the back end…there’s just a broader story to tell.”

Apple has worked directly with Showpad to help it optimize its user interface for iOS, says Warren, who figures he speaks with Apple about three times a month.

“So when there is an OS update coming out, our app is not only in compliance with it, but highlights the best features of it,” Warren says. When something like Touch ID debuted on Apple’s mobile devices, Showpad could take advantage of it. “Our approach to design is to mirror whatever the native UI is for the device,” he says.

While the overall tablet market has been flagging, Warren says he still sees strong demand for iPads among Showpad’s customers, and asserts that the company’s software runs on more iPads than iPhones. He says: “The struggle with iPads in the enterprise is that we have them, now what do we do with them?”

This Mountain View-based maker of Electronic Health Record and related software for medical practitioners/staff and patients publicly celebrated its entrance into the Apple Mobility Partner Program in December as part of a broader announcement of new product capabilities.

It’s too early to say what benefits drchono and its customers will gain from the company’s MPP acceptance, but Co-Founder and COO Daniel Kivatinos says it “formalizes something we’ve been trying to facilitate as a company from the start… We invested heavily in iOS before becoming formal partners with Apple.”

Being part of MPP does bode well for Apple ISVs working with each other, though, he says. "In the context of iOS, as the sector continues to evolve we are going to see more and more apps within iOS working together. For example, drchrono and box are connected," according to Kivatinos.

Drchrono got its start in 2009 when Kivatinos and Michael Nusimow sought to enable doctors to use the cloud to access medical data and take care of patients in a better way. They both had iPhones, but became intrigued by the as-yet-unavailable iPad as a bigger real estate platform that could better display the information medical professionals would really need. They began building for it in January 2010 and were ready with an app the first day that tablet was released in April. Drchrono now claims to have over 100,000 doctors signed up and around 8 million patients as customers, and recently was in talks with the Obama administration about ways to hugely modernize healthcare data sharing.

Going forward, drchrono will look to work in lockstep with Apple as the larger company fleshes out its HealthKit platform, which will work with iOS devices as well as other wearables. “Apple’s done a phenomenal job creating the best future medical toolkit for providers,” Kivatinos says.

Being part of the Apple Mobility Partner Program shouldn’t hurt drchrono’s chances of getting in on that.