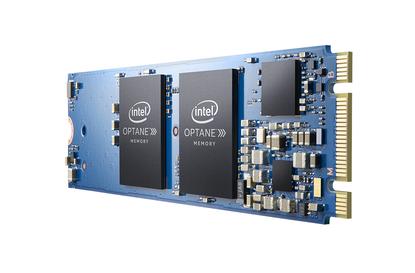 Intel's Optane technology is already shipping in the form of storage, but you'll have to wait until next year to buy Optane memory modules.

Optane is a new class of nonvolatile memory and storage based on 3D Xpoint, which was developed jointly by Intel and Micron.

Intel's first Optane products, announced this month at CES, are low-capacity SSDs that fit into the storage slots of PCs.

Optane memory DIMMs are different. They're intended to replace DRAM in servers and PCs. The DIMMs will fit into DDR4 slots.

Intel has started shipping the first Optane DIMMs for testing and hopes to release final products next year.

In demonstrations by Intel, Optane SSDs have performed 10 times faster than conventional SSDs. PC makers have said that game play, PC bootup and applications are all faster with Optane SSDs.

The base technology of both types of Optane products, 3D Xpoint, is a bridge between memory and storage, said Brian Krzanich, Intel's CEO, during an earnings call on Thursday.

Optane is "differential technology" that could change PC and server architectures, Krzanich said.

Intel has also floated the idea that Optane could unite storage and memory. For example, one Optane unit could serve as both storage and DRAM.

Optane also aligns with Intel's goal to focus more on data-center technologies, Krzanich said. In April, Intel made data-center products a centerpiece of its future strategy as it tried to break a longtime reliance on PCs.

But PC chips took in more than half of Intel's earnings for the fourth quarter of 2016.

Revenue for the quarter ended Dec. 31 was $16.4 billion, growing by $1.5 billion from the same quarter last year. Net income was $3.6 billion, down about 1 percent.

Revenue for the Client Computing Group, which deals in PC chips, was up $9.1 billion, growing by 4 percent compared with the same quarter of the previous year.

Sales of PCs with higher-end chips like Core i7 were strong during the holiday season, Krzanich said. In particular, gaming PCs did really well.