AWS - How cloud is shifting the paradigm for businesses 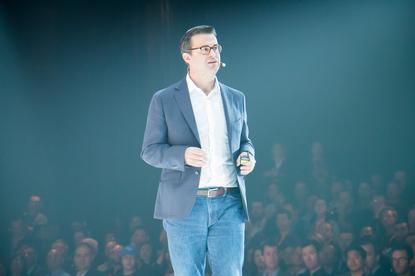 Amazon Web Services (AWS) has cemented its position as the king of cloud, adopting partners and customers at a rapid rate, but the company’s A/NZ chief said the adoption of cloud has resulted in new ways of approaching customer need.

Paul Migliorini has been riding the wave of cloud adoption in A/NZ for the last 17 months, and since taking the reins in August 2015, the AWS A/NZ managing director has been in discussions with some of the region’s biggest organisations as they contemplate the shift to cloud.

Migliorini sat down with ARN during AWS re:Invent 2016, and said that the pervasiveness of cloud technologies was changing the way partners and customers think about business problems.

“Today, there are tens of thousands of customers adopting cloud; they are adopting across all aspects of the business,” he said. “What is interesting is that it doesn’t really matter where you look. It is happening at scale. If you take a sector-based approach, every sector is doing it.

“Generally, what we are seeing is a core transformation and most organisations are looking at one of a number of vectors - or all of them - where they are looking to remediate tech debt or reduce friction, or think about ways that they can re-imagine their business," he said.

This “core transformation” movement - particularly at the big end of town - means AWS has had to educate customers and partners about how to drive change effectively amidst a plethora of possibilities.

“We want to create an environment where customers can be effectively educated on what they are able to do with the platform, and then our job is to enable them in the most effective way possible,” he said.

“There are a series of mechanisms which we use to help with the process of educating and enabling customers."

From a channel perspective, one of the ways AWS differs from other large vendors is that it commits resources to fledgling partners looking to grow at scale through cloud.

“If they [the partner] are starting out on our platform, it is really about giving them the tools to do what they need to do.

“We don’t really think about it as sales per se, it's just that we have a market which needs to be enabled. There are a lot of customers which want to do really interesting things so our job is to give them the tools to innovate as effectively as they can and then put enough capability into the ecosystem to help them to do it."

Building a cloud legacy for Australia and New Zealand

Migliorini takes a similar view to building a lasting business for AWS in A/NZ. The company takes the same long-term view to internal growth as it does to the channel.

“We are hoping to build a business that will outlast us all and so, we think about our customer relationships in that context,” he said.

“If you look at some of our longer-term relationships today, like Spotify, Netflix, or AirBnB, they started as tiny organisations. By having a long-term perspective, thinking about them beyond the context of a short-term contractual sale and by thinking about what we can do to help them over the long-term, we can build a good platform of trust in helping customers, as opposed to trying to sell things."

Migliorini said that, while a lot of what AWS develops on its platform is designed to help developers, the conversations at an executive level rarely touch on the technical.

“The reality is that technology is part of the equation, but this is a change in how we do things, largely about culture.

“You think about how people are innovating, the focus on experimentation and how we are thinking differently around risk, because the cost of failure [relating to cloud] is radically lowered.

“They are fundamental business conversations. If you want to be effective, you need to be agile, you need to have the ability to take insight and pivot on it quickly in a way that enables people to experiment. There is a whole series of really important board-level, c-level things in that.

Migliorini said Qantas’ move to AWS was indicative of this sort of shift in thinking and how technical developments can challenge thinking at the top.

He said Australia’s largest airline wanted to add on an additional route to Dallas from Australia but the company did not have the internal compute power to crunch the numbers.

“Qantas put that problem in an AWS context and consequently, it was able to put that flight leg on,” Migliorini explained. “You can think about that in the context of how to deploy an analytics solution on the AWS platform and all the technology that goes with that.”

“But really, what happened in a business context was that people who believed that the previous problem was not one which they could solve, now understand that they can solve big ticket issues in interesting ways using technology as a tool.

“It is reconditioning people on, effectively, the art of the possible. The whole paradigm of what you can do now changes,” he added.

Chris Player travelled to AWS re:Invent 2016 as a guest of Amazon Web Services.